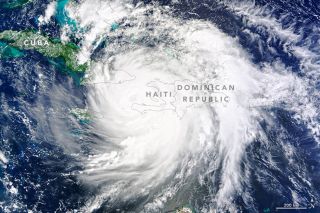 NASA’s Terra satellite acquired this image of Hurricane Matthew on Oct. 4, 2016, the same day it made landfall on southwestern Haiti as a Category 4 storm. At the time, Matthew had top sustained wind speeds of 143 mph (230 km/h).
(Image: © NASA Earth Observatory image by Joshua Stevens)

As of Wednesday afternoon, Matthew had weakened slightly, to a Category 3 hurricane with sustained winds of around 120 mph (193 km/h). The storm was moving slowly northwest through the Bahamas, with another landfall predicted to take place along Florida's east coast on Thursday night (Oct. 6) or early Friday morning (Oct. 7).

Matthew is currently gaining strength, and experts said they think it will intensify into a Category 4 storm once again before hitting Florida.

To learn more about the storm and its impacts on the Caribbean and the southeastern United States, check out the U.S. National Hurricane Center's special Matthew page here: http://www.nhc.noaa.gov/#MATTHEW

Matthew developed into a tropical storm on Sept. 28 over the Lesser Antilles, then intensified into a hurricane a day later. Images from another satellite — the GOES East spacecraft, which is operated by the U.S. National Oceanic and Atmospheric Administration — show the storm's progress shortly thereafter, tracking Matthew's sluggish north-northwest trek through the Caribbean from Sunday (Oct. 2) through Tuesday. (As of Wednesday afternoon, the hurricane was traveling just 12 mph, or 19 km/h.)