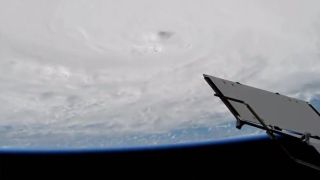 As Hurricane Matthew swirled over the Caribbean yesterday (Oct. 3), the International Space Station caught a glimpse of the massive storm. The space station flew over the Category 4 hurricane at 4:10 p.m. EDT as the storm made its way north through the Caribbean Sea.

Early this morning (Oct. 4), the storm made its first landfall in western Haiti, bringing winds of up to 145 mph (233 km/h) and a torrential downpour that forecasters said will amount to more than 2 feet (0.6 meters) of rainfall. Hurricane Matthew's eye is expected to reach Cuba later today, and some forecasts predicted the eye will reach the east coast of the U.S. by Friday.

The ISS wasn't the only satellite observing the hurricane from space. NOAA satellite GOES-East has also been keeping an eye on the storm. Because this satellite has a geostationary orbit, it provides continuous imagery of the eastern U.S. and the Atlantic Ocean by constantly hovering over the same region.

NASA's Global Precipitation Measurement mission or GPM core observatory satellite offers a less realistic, but much more colorful, view of the storm. The satellite flew over Hurricane Matthew on Sunday (Oct. 2) at 5:46 a.m. EDT and measured the precipitation expected to hit Hispaniola. The satellite estimated a downpour rate of at least 6.4 inches (163 millimeters) per hour and measured cloud tops as tall as 9.9 miles (16 km).

"Heaviest rain was seen well to the east of Hurricane Matthew's center," Hal Pierce, of NASA's Goddard Space Flight Center in Greenbelt, Maryland, said in a statement. "This area of strong, convective storms has been persistent over the past few days. This area of intense rainfall is due to convergence between the trade winds (prevailing easterlies) and the wind flow from the south with Matthew. This area of heavy rainfall with Matthew may cause devastating torrential rainfall as it moves slowly over Haiti."

Hurricane Matthew, an exceptionally powerful storm, will continue to slowly creep toward Cuba and the Bahamas before likely hitting Florida by the end of the week.

To watch the latest views of Earth from the ISS, check out our live stream of the ISS cameras and use our satellite tracker to monitor the station's location.