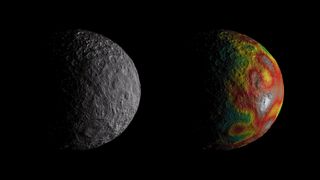 This still of Ceres from a NASA animation based on data from the Dawn spacecraft in orbit shows the dwarf planet (and largest asteroid) as it appears to the probe (left) and with a gravity-field map overlaid in false color. Red areas indicate regions where gravity is stronger on Ceres, while blue denotes a weaker gravity field.
(Image: © NASA/JPL-Caltech/UCLA/MPS/DLR/IDA)

Nestled in the asteroid belt, the dwarf planet Ceres contains water-rich materials that suggest it once boasted a global ocean in its distant past. Now, two new studies from NASA's Dawn mission may reveal traces of an ancient ocean in the crust, with remnants left behind in the muddy mantle beneath.

Scientists used the tug of gravity on NASA's Dawn spacecraft to track gravitational features across the dwarf planet Ceres. Combined with models of the evolution of the icy surfaces, these observations reveal an ocean mostly frozen into a strong but flexible crust, with a mud-rich inner layer that keeps things moving.

When Dawn arrived at Ceres in 2015, it found a mostly flat world with only a single mountain, Ahuna Mons, and craters that were smaller than anticipated and not very rich in geological features. Past researchers have hunted for an explanation for the mystery of the missing craters and the lack of mountains, and they have concluded that the planet's crust must be slowly relaxing, like honey poured onto a plate.

But that research looked at only small parts of the planet. The new research examined the world on a larger scale, Castillo-Rogez said.

The first paper by Anton Ermakov, a researcher at NASA's Jet Propulsion Laboratory, tracked small changes in Dawn's orbit to determine what is going on beneath Ceres' surface. As the spacecraft orbited the tiny world, Ceres pulled at it. More massive regions tugged more sharply on the spacecraft, while less dense regions had less of an impact. This affected how long it took the signal to travel from the orbiter to the antennas of NASA's Deep Space Network back on Earth.

By taking the gravitational measurements of the crust, Ermakov and his team found that the crust of Ceres is very close to the density of water, Castillo-Rogez said. The new data puts the crust thickness at only 25 miles (40 kilometers). The researchers also confirmed that the planet's mantle is rocky — something she said was expected. (While the researchers referred to the inner layer as a mantle, they warn that it shouldn't be taken as having the normal terrestrial connotations, where the mantle is molten rock.)

Ermakov and the Dawn team found that the massive mountain and three of the craters are all associated with gravity anomalies. The crater Occator is best known for hosting the largest and brightest spot on Ceres, while Kerwan and Yalode are the two largest confirmed craters on the planet. The connection of the gravitational anomalies with the four features supports the idea that Ceres is geologically active now or was very recently. [In Photos: The Weird Bright Spots on Ceres]

The team also found positive mass concentrations, or mascons, under the two largest basins. These mascons have been found on Earth's moon, Mars and Mercury. Researchers suspect that mascons on the moon came from a massive asteroid impact that changed the density of the lunar surface and its magnetic field.

"For Kerwan and Yalode, the shape of the gravity anomaly looks like a bullseye pattern, very similar to the gravitational signatures of lunar mascons," Ermakov said.

The research was published in the Journal of Geophysical Research: Planets.

Building on Ermakov's research, Roger Fu, a Dawn team member at Harvard University, examined the interior structure of the world. Ermakov and his team had demonstrated that the dwarf planet's crust was more like ice than water. But Fu's co-author and Dawn guest investigator Michael Bland of the U.S. Geological Survey had previously demonstrated that Ceres' crust is 1,000 times stronger than water ice, a finding Fu's new research confirmed.

Like his fellow author, Fu examined the planet as a whole. He modeled how the planet's crust flows. Rather than a pure-ice crust, Fu found that Ceres' surface is likely to be a mixture of ice, salts and rock. He also determined that clathrate hydrates are likely to be a significant component of the crust. A clathrate hydrate is a cage of water molecules surrounding a gas molecule.

"Methane clathrates are only one of several different salt species that might be in the crust," Fu told Space.com. "Even if it's there, it's still probably one of several co-existing phases."

Castillo-Rogez describes clathrates as "really the only option that makes sense."

Based on the results, the researchers think that Ceres once had more pronounced surface features that have gradually smoothed out over time.

According to Fu, with a rocky crust, "the really wide plateaus and basins — think in terms of global topographic features, like the Ceres equivalents of the Tibetan plateau or the entire Atlantic Ocean basin — would be a lot taller or lower."

But Ceres is mostly flat.

"The ice-salt-rock mixture crust means there isn't as much contrast between the high and low points," Fu said.

The flattening of the mountains and the valleys means that the strong crust must rest on a softer layer, which Fu and his colleagues think contains liquid mixed with the rock below the crust. Castillo-Rogez describes this as "salty mud or briny mud."

The team thinks most of the ancient ocean that once covered Ceres has been bound up into the crust, with only ice, clathrate hydrates and salts left behind to reveal its existence. While most of the ocean is tied up in the crust, the soft mantle suggests that some of it may still remain liquid. The results are consistent with thermal models of Ceres published before Dawn arrived.

Fu's research is published in the journal Earth and Planetary Sciences Letters.