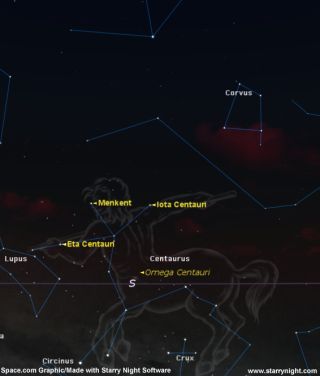 SKY MAP: The sky as seen at 10:00 p.m. local time on June 1 from midnorthern latitudes.

One of the most interesting of the constellations nowdominates the low southern sky at around 10 p.m. local daylight time: themythical creature that is half-horse, half-man, known as the centaur.

Actually, this particular star pattern, known as Centaurus, is one of two centaurs in our night sky. Theother is Sagittarius, the Archer, who traditionally has been depicted as acentaur about to shoot off an arrow in the direction of Scorpius,the Scorpion.

Centaurus is seen completely onlyfrom the Florida Keys, southernmost Texas, andthe Hawaiian Islands. Yet, in the highlatitudes of southern England,an assiduous stargazer must carefully watch that point on the southern horizonfor a short look at the 2nd-magnitude star Menkent(about as bright as Polaris, the North Star). In the northern United States, we can use this star(also known as Theta Centauri), to guide us to Iota, Etaand Omega.

The last is not a single star at all but a great swarm ofthem, indeed, the brightest and most splendid globularstar cluster in the entire sky. Shining at a moderately dim magnitude +4,it is easy to glimpse under good sky conditions with the naked eye. It has, infact, been known since ancient times (albeit as a star), and appeared in thestar catalogue of Ptolemy over 18 centuries ago and received the Greek letterdesignation of Omega from Johannes Bayer.

Edmond Halley (of comet fame) called Omega a nebula in 1677,but it was not until 1835 that its true glory as a cluster was revealed by the18 3/4-inch telescope that Sir John Herschel had taken to South Africa tosurvey the southern skies. Of Omega he wrote: "It is beyond all comparisonthe richest and largest object of its kind in the heavens."

Omega Centauri is about 17,000 light-years away and probablycontains over one million stars.

Theoretically, Omega Centauri can be seen from places as farnorth as New York or Philadelphia. But I can offer noencouragement to those residents of the Big Apple or City of Brotherly Lovebecause even if all of their streetlights were somehow to be extinguished and afresh, clean Canadian air mass were to position itself directly over theNortheastern U.S., the thick haze that is perpetually evident along and nearthe horizon almost always hides Omega; and even if one were to somehow get itin view through a telescope the cluster would be robbed of its full glory. Tosee this globular cluster adequately, one should be no farther north than aboutlatitude 35-degrees.

Of course, Centaurus' greatestclaim to fame is that it contains the closest star in the sky, Rigil Kentaurus. Ironically, thatis not how this particular star is best known. More often than not it isreferred to by its designation Alpha Centauri. This is the third brightest starin the sky and is also a beautiful double star, composed of two yellow starssomewhat like the Sun. It is but a mere 4.3-light years from us and has a faint11th-magnitude companion about 2-degrees away known as Proxima Centauri.

Proxima's position relative to themain pair actually places it a trifle closer to us at the present time.

To the upper right of Alpha is first magnitude BetaCentauri, which has the name Hadar, and seems to be anapparent neighbor, though it's hardly that. In reality, it's 500 light yearsaway, a bright blue star that outshines our Sun some 10 magnitudes or 10,000times!

In their way, the ancients had as facile imaginations asours. While some of us would people the universe with little green men, theyplaced in the sky a number of exotic beasts of which Centaurusis just one. In the sky itself, we are hard put to imagine the mythologicalcharacter in the confusing jumble of stars that form Centaurus.This star pattern is often associated with the mythological centaur, Chiron,who was highly skilled in medicine.

This leaves me ending this week's column with a question. Ifa centaur fell ill, who would he consult: a physician . . . or a veterinarian?

Joe Rao serves as an instructorand guest lecturer at New York'sHayden Planetarium. He writes about astronomy for The New York Times and otherpublications, and he is also an on-camera meteorologist for News 12 Westchester, New York.