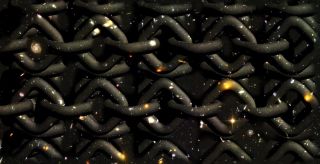 An eruption of cosmic knots at the Big Bang may explain why our universe has three dimensions.
(Image: © Keith Wood/Vanderbilt)

We take for granted that we live in a world of three dimensions governed by the laws of physics, and don't often wonder why. But a group of physicists just hatched a new theory that they think may explain our three-dimensional universe.

The physicists think that their new model could also explain inflation, the exponential expansion of space the universe experienced just moments after the Big Bang.

Thomas Kephart from Vanderbilt University and four of his colleagues from around the world wanted to figure out why our universe seemingly has just three dimensions, especially since, as they wrote, "quantum gravity scenarios such as string theory... assume nine or ten space dimensions at the fundamental level."

They combined particles physics with mathematical knot theory to try and work this out, borrowing the concept of "flux tubes," which are flexible strands of energy that link elementary particles together.

Quarks, the elementary particles that  make up  protons and neutrons, are held together by another type of elementary particle called a gluon that "glues" quarks together. Gluons bond positive quarks to matching negative antiquarks with these flux tube energy strands.

Normally, the flux tube that links a quark and antiquark would disappear when the two particles come into contact — they would self-annihilate. But, the team said in a paper published by the European Physical Journal C, if two or more flux tubes become intertwined, it becomes stable. If the tubes take the form of a knot, they become even more stable and can outlive the particles that created it.

RELATED: The Mystery of the Universe's Missing 'Normal' Matter Has Begun to Unravel

"A knot or link between two flux tubes is only classically stable if these are unable to intersect and either reconnect or pass through each other," the researchers wrote. "Such  intercommutations  lead to the well-known scaling behavior in cosmic string networks, which has been observed in several examples of non-interacting strings."

In moments of transition, such as what happened during the Big Bang, the linked particles would get pulled apart, and the flux tube would get longer until it reaches a point where it breaks. When it does, it releases enough energy to form a second quark-antiquark pair that splits up and binds with the original particles, producing two pairs of bound particles.

The physicists equated this to how cutting a bar magnet in half produces two smaller magnets that both have north and south poles.

If the tubes were knotted together, they could quickly expand and multiply. The team calculated the energy that this flux tube network might contain and found that it would be enough to power an early period of cosmic inflation.

While this sounds like an incredible amount of action to take place in such a short period of time — inflation theory suggests that the universe expanded exponentially in milliseconds — Kephart told Seeker that flux tubes form naturally during times of transition.

"Flux tubes form in phase transitions where complex forms of matter can arise," he explained in an email. "For example, water vapor is structurally simple, but if it is rapidly cooled you get a flurry of snowflakes — they all look different and the new phase seems much more complex."

RELATED: Here's How Light May Have Burst Through the Universe and Out of the Dark Ages

In an environment of extremely high energy, the team said that the quark-gluon plasma would have been an ideal environment for rapid flux tube formation in the very early universe.

But, crucially, they noted that this would only work if the universe existed in three dimensions. If you add more dimensions, the process becomes unstable.

"Of all possible dimensionalities of space, our mechanism picks out three as the only number of dimensions that can inflate and thus become large," the team wrote. "This model may explain why we live in three large spatial  dimensions,  since knotted/linked tubes are topologically unstable in higher-dimensional space-times."

This would technically agree with a computer model from 2012 where Japanese scientists found that at the moment of the Big Bang, the universe had 10 dimensions, but only three of these spatial dimensions expanded. So, the three-dimensional space we experience could have formed from 10 dimensions, just as superstring theory predicts.

Their new theory would also agree with certain gauge theories, which are theories used by physicists that describe the limits of physical laws and how they apply to symmetric transformations.

RELATED: Astronomers Capture the First 'Image' of the Dark Matter That Holds the Universe Together

"Not only does our flux tube network provide the energy needed to drive inflation, it also explains why it stopped so abruptly," he said in a statement. "As the universe began expanding, the flux-tube network began decaying and eventually broke apart, eliminating the energy source that was powering the expansion."

The researchers say that when the network broke down, it filled the universe with a gas of subatomic particles and radiation, allowing the evolution of the universe to continue to what we see today.

"This combines knowledge of gauge theories and the possibility that an initial uniform configuration can condense into flux tubes," Kephart told Seeker, "along with the fact that knots and links for strings can only be stable in 3D, plus the current state of the theory of the early Universe and the need for a natural way to inflate."

While this is all theoretical, Kephart said that the next step would be to continuing to develop their theory until it can make some predictions about the nature of the universe that can actually be tested.