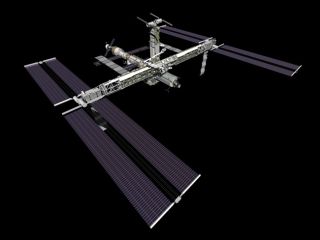 The new Starboard 3/4 solar arrays (left) of the International Space Station are shown fully deployed in this computer-generated image of the laboratoryâ€™s anticipated appearance after the June 2007 STS-117 mission.
(Image: © NASA)

When NASAspacewalkers head outside the International Space Station (ISS) next week toinstall new solar arrays and other equipment, they?ll have some newtape-wrapped tools at their disposal.

The fourspacewalkers of NASA?s Atlantis shuttle crew are borrowing techniques andimprovised tools from two earlier ISS-bound shuttle missions, as well as newhardware of their own, to complete the three planned excursions of theirSTS-117 mission.

?Kind ofthe theme that?s running through here is that we get to learn the challengesthat other crews have faced,? STS-117 mission specialist Patrick Forrester, aveteran spacewalker, said in a preflight briefing.

Two newtools will help Forrester and his fellow spacewalkers wrestle tough bolts intosubmission and swap out a station vent. Others will help spacewalkers coax anolder ISS solar array into its storage boxes.

?There?salways usually something new that comes up,? Atlantis astronaut Steve Swanson,who is making his first spaceflight and spacewalk during STS-117, said in apreflight interview. ?I hope I?m trained well enough to handle thosesituations.?

DuringNASA?s STS-115shuttle flight in September 2006 -- which delivered a pair of portsidesolar arrays to the ISS -- spacewalkers struggled to remove vital launchrestraint bolts that, if left in place, would have prevented the new stationpower plants from rotating to track the Sun.

STS-117spacewalkers will tackle a similar set of bolts while installing the station?snew starboard solar arrays during their first two spacewalks, but will have atool known as a ?torque multiplier? to beef up the lock removal task. Thedevice is typically reserved for use on bolts within a space shuttle?s cargobay, but has been adapted to fit ISS hardware, NASA officials said.

?Usingthat, we don?t think that we?ll have any problem pulling any of the launchrestraints off,? Swanson said in NASA interview.

?to help fold away an older solararray extending starboard from the top of the station?s mast-like Port 6 trussduring their second or third excursion. The tools were first used during December?sSTS-116 mission to free snags and incorrect folds on an earlier Port 6array retraction.

?We haveareas that we may need to poke or may need to get into position,? Johnson said,adding that each of the tools are wrapped in translucent orange Kapton tape toward off electric shocks from the old arrays.

During thethird planned spacewalk of the STS-117 mission, astronauts Jim Reilly and DannyOlivas are expected to install a new hydrogen vent valve to the exterior of thespace station?s NASA Destiny laboratory that will allow the future activationof a U.S. oxygen generator to support larger outpost crews. But to do that,engineers had to come up with a new piece of hardware.

?Theproblem is that we don?t have any standard tools to do that kind of remove andreplace,? Johnson said.

To installthe new hydrogen vent, engineers came up with a ?fluid fitting torque device?that is designed to fit around the vent?s attachment point, drive loose aconnecting bolt and free the spot for the new hardware.

?It?s veryheavy,? Johnson said of the new tool. ?It?s kind of like a boat anchor as faras I?m concerned.?

?Now,you?ll see the symmetry,? Johnson said of the space station?s configurationonce the three STS-117 spacewalks are complete. ?[The] space station isstarting to look like what we want it to look like.?