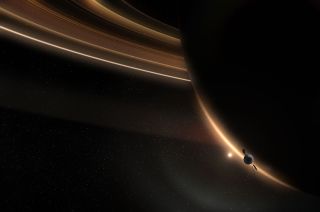 NASA’s Voyager probe sails by Saturn, as seen in the new film, "The Farthest."
(Image: © PBS)

NEW YORK — "The Farthest" follows NASA's two Voyager spacecraft through their pioneering exploration of the solar system, and a free screening and panel Thursday evening (Sept. 21) will follow the film itself through its development and explore how it tells the story of those extraordinary probes.

The screening begins at 6 p.m. EDT at New York University's Arthur L. Carter Journalism Institute, and is followed by a panel with John Rubin, an executive producer on the film, and Heidi Hammel, a planetary astronomer and science communicator. The panel discussion will be livestreamed online starting at 8 p.m. EDT for those who can't be there in person, exploring the topic "Making Science Movies."

The screening and panel are part of the Kavli Conversations on Science Communication series, hosted by NYU's Science, Health and Environmental Reporting Program.

The two Voyager probes launched in 1977, giving humanity its first close-up looks at the solar system's outer planets. Voyager 1 swung up out of the plane of the solar system after visiting Jupiter and Saturn — and recently became the first human-made object to enter interstellar space — while Voyager 2 continued onward to visit Uranus and Neptune, and still travels to the solar system's rim. Both probes continue to explore today, flying outward at more than 30,000 mph (50,000 km/h).

"The Farthest" aired on PBS on Aug. 23, and is due back for an encore in November.