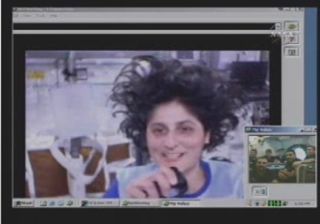 NASA astronaut Sunita Williams (left), an Expedition 15 flight engineer aboard the International Space Station, speaks to the underwater crew of NEEMO 12 aboard Aquarius during a May 17, 2007 video call.
(Image: © NASA TV.)

NASAastronaut Sunita Williams made a unique ship-to-ship phone call from theInternational Space Station (ISS) Thursday to check in with six aquanautsliving at the bottom of the Atlantic Ocean.

Williams,an ISS Expedition 15 flight engineer, called a NASA crew of divers,doctors and astronauts working aboard the Aquarius undersea laboratory,where a series of robotic surgery tests and spacesuit mobilityexperiments are underway.

?You guysare in one of the prettiest parts of the world,? Williams toldthe Aquarius crew from her perch 220 miles (354 kilometers) above Earth.

NASAastronaut Jose Hernandez, flight surgeon Josef Schmid and Tim Broderick, agastrointestinal surgeon from the University of Cincinnati, are serving aboardAquarius with Stefanyshyn-Piper. Professional divers JamesTalacek and Dominic Landucci, of the University of North Carolina at Wilmingtonthat operates Aquarius for the National Oceanic and Atmospheric Administration,complete the NEEMO 12 crew.

Theaquanauts took a familiar face to the ocean floor with them in the shape of theflat image of a JackRussell terrier named Gorby, the beloved dog of Williams.

?That?sawesome, thank you so much for taking Gorby with you,? Williams told theAquarius crew. ?It?s really cool to see him.?

Williamshas lived aboard the ISS for more than five months and is dueto return in mid-June during NASA?s STS-117 shuttle mission to the orbitallaboratory. She is also a former Aquarius aquanaut and spent seven daysunderwater during NASA?s NEEMO 2 missionin May 2002.

?I think NEEMOwas, for me, a great precursor for coming up here,? Williams told the Aquariuscrew of the ISS. ?It?s very much a great parallel and I think it?s a great warmup for anybody coming up to live on the space station.?