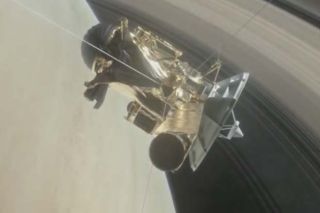 Visualization of the Cassini probe over Saturn.
(Image: © NASA/JPL-Caltech)

Update Sept. 15: In 1997, the Cassini-Huygens mission's epic journey to Saturn began when it launched from the Kennedy Space Center in Florida. In 2004, the probe arrived in orbit around Saturn and for the past 13 years it has amazed the inhabitants on planet Earth on a daily basis. In 2005, the Huygens probe carried by Cassini landed on Titan, Saturn's largest moon. The  mission officially came to end on Sept. 15, 2017. Take a look back at the probe's amazing mission with NASA, ESA and the Italian Space Agency in these retrospective videos below. [Cassini's Saturn Crash 2017: How to Watch Its 'Grand Finale']

Footage of the loss of signal (LOS) call from mission control at NASA's Jet Propulsion Laboratory. The Cassini-Huygens mission to Saturn officially came to end on Sept. 15, 2017.

Cassini project scientist Linda Spilker talks about some of the last ever pictures taken by the Cassini probe.

The European Space Agency reflects on the discoveries made by the NASA/ESA/ISA Cassini-Huygens probe.

The NASA Cassini team that managed the probe's Composite Infrared Spectrometer (CIRS) talks about the great discoveries made with the instrument.

The team at NASA's Jet Propulsion Laboratory talk about the mission.

The European Space Agency recalls the historic landing on the Saturn moon and the mission that made it possible.

Cassini team members reflect on the probe's epic journey ahead of the mission end on September 15, 2017.

The Cassini-Huygens mission delivered sounds of Saturn auroras, epic imagery of the planet's ring and moons and much more.

Here's a look at how Cassini's Grand Finale orbits around Saturn will squeeze even more science out of the long-lived mission ahead of the probe's fiery plunge into the ringed planet on Sept. 15, 2017.