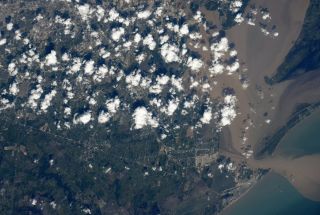 Carie Lemack is co-founder and CEO of DreamUp, "the first company to bring space into classrooms and classrooms into space." A former national security policy expert/advocate and producer of an Academy Award-nominated film, Lemack is a proud alumna of Space Camp and supporter of all space cadets reaching for the stars. Lemack contributed this article to Space.com's Expert Voices: Op-Ed & Insights.

The future of America's space program depends on all Americans helping the residents of Houston.

The closure through Labor Day of the Johnson Space Center, which employs 10,000 people, is one of the most notable examples of the aftermath of Hurricane Harvey. If "Space City" is to regain its influence; if the Houston Independent School District (HISD), which has 283 schools and 213,000 students, is to emerge better and stronger from this situation; if Texas' largest city, which has a gross domestic product of $503 billion, is to revive its economy — if all of these things are to happen, if all of these things must happen, we must make space-based research a priority.

That rule also applies to two of the city's major research universities, the University of Houston and Rice University. The latter is a site of particular significance, as Rice Stadium is the venue where President John F. Kennedy (in 1962) would summon the residents of Houston — and fellow citizens nationwide — to make the seemingly impossible probable. [Saturn V and the Storm: Houston's NASA Landmarks Weather Hurricane Harvey]

The words echo still: "We choose to go to the moon."

Let us, therefore, choose to do something even more immediate by saying, "We choose to restore the greatness of Houston, not because it is easy, but because it is right. We choose to make space-based research more accessible to a city whose reputation depends on it and whose students deserve it."

Let us also applaud the people of Houston, whose names we may never know but whose acts of kindness, generosity and sacrifice we will never forget. Let us pause to reflect on the greatness of America, thanks to the goodness of America.

Let us resolve, then, to renew the spirit of Houston with a science, technology, engineering and math (STEM)-centric curriculum that empowers teachers and students.

Now is the time to seize this opportunity — despite the inopportune timing of this mission, when many residents have not had a chance to mourn the loss of their loved ones and livelihoods, and as many continue to assess how to rebuild after the worst has happened, as the exhaustion sets in and shock wears off.

This trauma is a serious injury to the psyche of Houston and the physical health of the body politic. But Houston will recover, since failure is not an option for such a proud and decent people.

The reopening of the Johnson Space Center Sept. 5 is an invitation to reconsider — and improve — the academic quality of education in Houston in general. We must prepare students with a curriculum that enables them to soar, that encourages them to explore the heavens by sending their experiments up from the earth, that extends this journey to the International Space Station and beyond.

Let us start anew with space-based research worthy of a great city, where schools and universities work together, where citizens and communities partner to ensure the success of future generations, where Houstonians lead the charge for students, teachers, parents, scientists and engineers far and wide.

Houston, we will fix the problem.