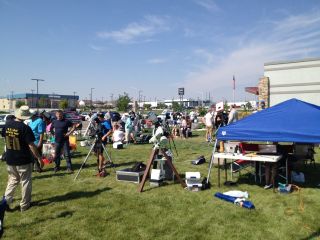 Eclipse viewers from all over the world gathered in Casper, Wyoming, to find their special spot to soak in the sun.
(Image: © Leonard David)

CASPER, Wyo. — To paraphrase the legendary fighter who at the time was known as Cassius Clay, it was a celestial punch that was a true knockout. Yesterday (Aug. 21), a total eclipse of the sun wowed skywatchers from one coast of the U.S. to the other.

"It's all about what the eclipse means to you, what it means to you and to you only," and how personally it affects you, said John Goss, president of the Astronomical League, the sponsor of Astrocon 2017 here in Casper, which was in part a celebration of the total eclipse of the sun. [The Most Amazing 2017 Total Solar Eclipse Photos]

Lost in the moment

Skywatcher Craig Bobchin from Corona, California, was armed with major telescope and camera gear. "It was my first total eclipse. I was prepared for this, but I wasn't prepared, if that makes sense," he said.

Bobchin snagged images of the sun's corona and other aspects of the eclipse.

"I shot raw images. I'm taking them home and going to make a time lapse of the event," he told Space.com.

"It happened faster than I thought," Bobchin said. "I was lost in the moment. It was amazing. I've never seen anything like that. For this first occasion, I am really happy with what I got."

In 2024, Bobchin said he's headed for Texas for the next U.S. total eclipse. "That's a guarantee."

Also on hand here for the sky show was Fred Espenak, known popularly as "Mr. Eclipse." A retired astrophysicist from NASA's Goddard Space Flight Center in Greenbelt, Maryland, he explained that the overwhelming majority of 2017 eclipse observers are "totality virgins" – meaning they've never experienced a total eclipse before.

But within those few precious minutes, Espenak said, "people have joined an exclusive club of the most spectacular thing you can see with a human eye. There are few events in life that leave a permanent, indelible impression," he said, and "a total eclipse of the sun is just such an event."

Espenak said he drove from Arizona to view the total eclipse in Casper.

"I don't speak much on eclipse day, just growl!" he said.

First captivated by a total eclipse in 1970, Espenak has taken part in 27 eclipse expeditions and traveled to every continent to do so, including jaunts to Antarctica.

Espenak is creator of the NASA Eclipse Web Site, where he has posted maps (generated using computer models) showing the time and location of every solar and lunar eclipse from 2000 B.C. to the year 3000. He's published more than a dozen NASA reference publications, each one focusing on a specific, upcoming eclipse.

But the Great American Solar Eclipse of 2017 is distinctive.

"First of all, it's in the United States," Espenak told Space.com. It also marks an epoch in the use of technology. For one, "it's citizen science in action," he said, referencing the various apps from NASA and other groups that have asked eclipse observers to collect and submit data on their mobile phones, "and that's one of the really unique aspects."

Leonard David is author of "Mars: Our Future on the Red Planet," published by National Geographic. The book is a companion to the National Geographic Channel series "Mars." A longtime writer for Space.com, David has been reporting on the space industry for more than five decades. Follow us @Spacedotcom, Facebook or Google+. Follow us @Spacedotcom, Facebook and Google+. Original article on Space.com.