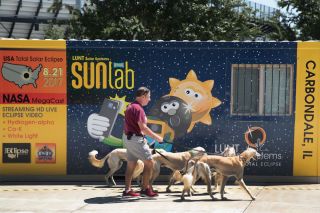 Saluki dogs are walked past a solar eclipse exhibit on the campus of Southern Illinois University on August 19, 2017, in Carbondale, Illinois.
(Image: © Scott Olson/Getty Images)

CARBONDALE, Ill. — A big event here in this unassuming college town might normally be a rival football game — a heated matchup at the Southern Illinois Salukis' 15,000-seat stadium — but on Monday, Carbondale is expected to play host to a whopping 50,000 visitors, all flocking into town to witness one of the most anticipated skywatching events in recent decades: a total solar eclipse.

On Monday, the moon will slip between Earth and the sun, blocking the sun's light and casting a shadow over the planet. This year, for the first time since 1918, the eclipse will darken skies across the entire United States, offering skywatchers in most parts of the country the chance to see a partial solar eclipse. But within a 70-mile-wide (113 kilometers) band that stretches from Oregon to South Carolina, people along this so-called "path of totality" will be treated to a total solar eclipse. [Total Solar Eclipse 2017: Everything You Need to Know]

And by pure cosmic coincidence, Carbondale has found itself at the center of eclipse mania.

The Midwestern town's serendipitous placement along the path of totality means it will experience a longer period of darkness than almost anywhere else in the country (2 minutes and 38 seconds). And it's also the only city that will again find itself along the path of totality for the next solar eclipse that will sweep across the U.S., in 2024, earning it the nickname "Solar Eclipse Crossroads of America."

"There has never been a time when the spotlight has shined so brightly on Carbondale, so we see this as an amazing opportunity for us, and [Southern Illinois University], to introduce ourselves to the rest of the country and the world," said Gary Williams, city manager of Carbondale.

The city is taking its hosting duties seriously: Town officials have been planning for the solar eclipse for nearly two years. Saluki Stadium on the Southern Illinois University (SIU) campus will be one of the main viewing areas, with approximately 15,000 people expected to pack into the stands on Monday. (For comparison, Williams said games at Saluki Stadium have been averaging 5,000 spectators per event over the past few years.)

An arts and crafts fair, comic-con, science and technology expo and "Crossroads Festival" will also be taking place this weekend on the SIU campus, as part of the eclipse festivities. In addition, special events and musical performances are slated to take place downtown and outside city hall.

"It's definitely the largest thing Carbondale has ever done," Henry told Live Science.

In addition to attracting visitors from near and far, the solar eclipse has inspired the local community, according to Williams.

"The event has sparked so much conversation among everyone and in my opinion has helped the community and the region think bigger and beyond our geographic borders," he told Live Science in an email. "I hope that we can maintain this momentum, as it will only make us get better and enhance our ability to attract people to our region."