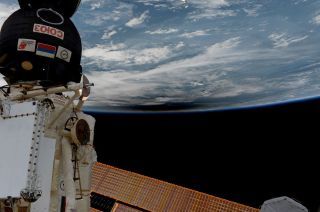 Expedition 52 flight engineer Paolo Nespoli of the European Space Agency (ESA) photographed the umbra shadow of the "Great American Solar Eclipse" as it darkened an area near the limb of the Earth, about 1,050 miles (1,700 kilometers) away from the space station.
(Image: © NASA/ESA)

As millions of people on Monday (Aug. 21) looked up to the sky to catch sight of the "Great American Eclipse," six astronauts and cosmonauts on the International Space Station (ISS) gazed down to view the shadow of the moon darken the Earth below.

The Expedition 52 crew witnessed the total solar eclipse from orbit, experiencing three distinct views of the celestial spectacle as they circled the Earth three times. It was only the seventh time that a spacecraft's crew had seen a total solar eclipse (as visible from the Earth) in the almost 60 years of human spaceflight.

NASA astronauts Randy Bresnik, Jack Fischer and Peggy Whitson, together with European Space Agency astronaut Paolo Nespoli and Roscosmos cosmonauts Sergey Ryazanskiy and Fyodor Yurchikhin, were in position to observe the eclipse both before and after the path of totality traversed the continental United States. The crewmembers were also able to see the moon's umbra shadow as it fell over a portion of the country. [See the most amazing photos of the 2017 total solar eclipse]

"All of a sudden, this huge black shadow went across the Earth. It was amazing and it was cool to see from this vantage point. So absolutely awesomesauce times three. Chocolate awesomesauce with a side of sun awesomesauce. Wow, it was awesome," exclaimed Fischer.

Circling the Earth every 90 minutes and equipped with the proper solar filters for their cameras, the crew's first opportunity to photograph the eclipse preceded the point when totality was visible from the ground. From their vantage point 252 miles (405 kilometers) over the western United States, the station residents experienced a partial solar eclipse, with 38 percent of the sun blocked out by the moon.

"We had an armada of equipment," said Nespoli. "We were flying back and forth in the station, from the Cupola to the Russian segment, up and down."

On their second pass, the astronauts and cosmonauts turned their attention to the Earth. Flying over Hudson Bay in Canada, the space station made its closest approach to the moon's umbra, just over 1,050 miles (1,700 kilometers) away. The crew caught sight of the sprawling shadow as it moved through southern Illinois and southwestern Kentucky, as positioned on the horizon from their perspective in orbit.

"I had seen pictures from previous eclipses, so I think I underestimated what this would look like. It was much darker than I gave it credit for being," said Whitson.

Rounding the Earth a third time, the Expedition 52 crewmates again caught sight of the eclipse just after the moon's shadow lifted off the surface of the planet. At maximum, the crew was able to capture photographs of an 84 percent partial solar eclipse just a few minutes before orbital sunset.

Continuing to watch as the sun dipped behind the Earth's atmosphere, the crew was able to get one last look at the partial eclipse before it was obscured by the planet.

NASA, which also deployed scientists and astronauts to the states within the path of totality and captured imagery from high-altitude aircraft and balloons, shared the photos and videos taken by the space station's crew of the eclipse soon after the data was received by Mission Control in Houston.

This may have been the last total solar eclipse witnessed by a crew on board the International Space Station — or at least the last one visible from the United States. The next total solar eclipse to traverse the country will be on April 8, 2024, the same year that the orbiting laboratory is currently slated to be decommissioned.

"I look forward to the next time we have a full eclipse," said Bresnik. "Maybe we'll be taking pictures from a lot farther away."

See more photos and video of the solar eclipse from the space station at collectSPACE.