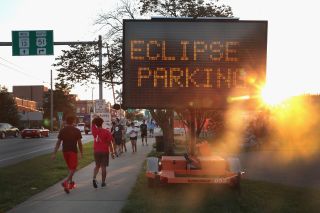 One of the biggest astronomical events of the century is finally here: Today (Aug. 21), a total solar eclipse will cross the U.S. from Oregon to South Carolina, starting in Oregon at 12 p.m. EDT/9 a.m. PDT (1600 GMT).

To viewers inside the "path of totality," the moon will completely cover the sun, darkening the sky and revealing the star's hidden atmosphere. This cloak of darkness has been known to make plants and animals behave strangely; it also creates a "360-degree sunset," in which the horizon in every direction will glow as if twilight had arrived early. It's an event that transcends science and stargazing, and it is quite simply amazing.

Everyone in North America will be able to see at least a partial solar eclipse (assuming clouds don't block your view), so make sure you get outside and see this incredible event. Check NASA's interactive map to find out exactly when the eclipse will be visible in your area.

Remember to protect your eyes during the eclipse — don't look directly at the sun without a solar filter or solar glasses. It is safe to remove your glasses only when the disk of the sun is completely obscured by the moon. Space.com will carry live updates as the eclipse crosses the country, as well as webcasts of the eclipse from throughout the path of totality.

Scientists and experienced skywatchers have already flocked to the path of totality, lugging telescopes, cameras and scientific equipment. But the eclipse has also drawn many people who otherwise have no interest in skywatching or astronomy. The event is so spectacular, it transcends those categories.

"Those who have not actually been immersed in [a total solar eclipse] have a hard time understanding what all of the fuss is about," E.C. Krupp, director of the Griffith Observatory and an eclipse enthusiast, wrote in an op-ed for Space.com. "It is, however, the most remarkable event ever delivered by the sky. Only the aurora, a close second, comes near totality in impact on the eye and on the heart."

If you aren't traveling into the path of the eclipse yourself, you probably know someone who is. We asked employees at Space.com's parent company, Purch, if they were traveling to see the eclipse and many of them responded, "yes." Mona Bushnell, a writer for Business News Daily and Tom's IT Pro, said her husband's interest in astronomy has rubbed off on her and she's looking forward to this major celestial event.

"We set up our telescope on the sidewalk in Queens during the supermoon lunar eclipse in 2015," Bushnell told Space.com. "It was awesome, not only because it was such a special event, but also because people from all walks of life stopped and asked to take a look, and before long, we had gathered quite a crowd. No one knew each other. Many didn't even speak the same language, but for one second, we were united in our humanity and dwarfed by space together. That's why I want to see the solar eclipse."

Michael Freudberg, a sales development and ad product marketing manager for Purch, is an avid backpacker and will be headed to a remote part of Wyoming to see the eclipse. He said he'll enjoy the splendor of the great outdoors, with the added bonus of a total solar eclipse.

"I figure [a total solar eclipse] doesn't happen too often, that it is something people whose opinions I respect speak of in awe, and I like to travel/backpack even when the sun isn't disappearing," he told us. "I want to think about how scared people felt before they knew the very innocuous science behind why the sun disappears for a couple minutes, then sit back and enjoy the comfort of knowledge in a beautiful setting. I want to share the gift that is the American wilderness with my brother, who will be backpacking for the first time. I want to see something millions will see that day from a place that no one else will see on that day."

Science writer David Baron, author of the book "American Eclipse" (Liverlight, 2017) about the total solar eclipse of 1878, discussed his own eclipse epiphany during a TED Talk earlier this summer. Baron had heard from an astronomer that total solar eclipses are "the most awe-inspiring event in all of nature," and that "before you die, you owe it to yourself to see a total solar eclipse."

That piqued Baron's curiosity, he said, so he traveled to Aruba in 1998 to see this incredible sight. The experience "changed my life," said Baron, who now travels to see total solar eclipses around the globe.

"[A total solar eclipse] is the ultimate experience of awe," Baron said during the TED Talk.

"That word, 'awesome,' has grown so overused that it's lost its original meaning," he continued. "True awe — a sense of wonder and insignificance in the face of something enormous and grand — is rare in our lives. But when you experience it, it's powerful. Awe dissolves the ego, it makes us feel connected, it promotes empathy and generosity. Well, there is nothing truly more awesome than a total solar eclipse."

On Friday and Saturday, traffic conditions leading into the path were mostly clear, even though experts predicted clogged highways leading up to the big event.

But many people already in the eclipse path have been celebrating for days with festivals, concerts and other pre-eclipse events. You can read about what's happening inside the path here on Space.com; we have staff members reporting live from Rexburg, Idaho and Carbondale, Illinois; you can also get live updates from our other reporters stationed along the path on our main eclipse page.

In Carbondale, Illinois — which is close to the point of longest duration, where totality will last for about 2 minutes and 40 seconds — organizers from the city and Southern Illinois University (SIU) Carbondale have been formally planning for the eclipse for a year.

"We believe that this opportunity warrants a celebration, and we also wanted to make sure that we have activities and entertainment available for visitors and residents," Gary Williams, city manager of Carbondale, told Space.com.

"As of today, our weather seems ideal, so if that doesn’t change, we would expect that our number [of] visitors will be on the high side of estimates, certainly more than 50,000," he said. "The magnitude of this event has resulted in a lack of hotel rooms throughout the region, which tells us we're going to have a busy weekend.  As far as SIU, the Saluki Stadium holds around 15,000 people, but games have been averaging around 5,000 per event over the past few years. We were told this week that the stadium is nearly full, so this may be the largest crowd that has been hosted at that venue."

If you are planning on traveling into the path of totality today, give yourself lots of time to get to your destination. Roads leading into the path are expected to experience heavy traffic. It's a good idea to bring basic supplies, such as water and food, and fill up your gas tank ahead of time.

If this is your first time viewing an eclipse, don't worry about photographing totality — just enjoy this spectacular sight.

Check out these eclipse apps to find out when and where to see the eclipse in your area, plus other news and information about the event.

If you can't make it into the path of totality, you can watch one of the many free livestreams of the eclipse.

Keep checking Space.com for live updates, news and images from the eclipse, and enjoy the awesomeness!