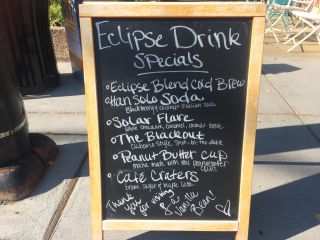 A coffee shop in Idaho Falls prepares for the arrival of the Aug. 21 total solar eclipse.
(Image: © Calla Cofield/Space.com)

Hellooooooo, space fans! If you aren't already in the path of totality for the Aug. 21 total solar eclipse, I hope you're getting ready to go there. If you can't make it, be sure to watch the event on one of the many livestreams that will be available, and on Space.com's home page starting at 12 p.m. EDT (1600 GMT) Monday.

I'll be reporting on the eclipse from Rexburg, Idaho, which lies almost at the center of the path of totality. Viewers in this location will enjoy about 2 minutes and 15 seconds of the moon completely covering the face of the sun, an event that many people say is the most amazing celestial event that can be seen with the naked eye.

The total solar eclipse will go from Oregon to South Carolina, crossing over a handful of large cities, including Nashville. There's no precident for a total solar eclipse that crosses such a wide, heavily populated area, so Rexburg (pop. about 27,000) and the surrounding areas are bracing for as many as 500,000 visitors. With traffic heading to one festival in Oregon causing a 30-mile backup on Friday, it's possible that the major highways leading into the path could become veritable parking lots.

With that in mind, my traveling companions and I decided to leave Salt Lake City at 6 a.m. on Saturday to try to avoid the potential rush of visitors.

We loaded up the car before sunrise and were greeted by a wonderful omen: a crescent moon hanging low in the sky. The eclipse happens during a new moon, so that crescent served as a countdown clock to the main event; the remaining crescent of light will get thinner and thinner, and finally disappear on Monday.

It's only a 4-hour drive from Salt Lake City to Rexburg, but with enough traffic, that time could easily double. We got on the road and quickly encountered...

Maybe all the other overprepared people headed to Rexburg earlier this week? Other areas around the country are also reporting that the expected traffic has yet to materialize. We'll see what Sunday holds. We did see one car that was clearly headed for the path of totality:

If you're still packing for the total solar eclipse, know that residents have been told to prepare as if a major storm were coming — stock up on food and water, fill your gas tank, and don't travel on eclipse day if you don't have to. If you're driving, fill your tank when you can, and keep some supplies in the car. It's likely that the influx of people will overwhelm the cellular networks in Rexburg; it's less likely, but still possible, that the population boom could cause the city power grids to fail.

With that in mind, I packed thoughtfully for this trip. In the image above, you can see my essential supplies: at center, eclipse glasses for viewing the partial phases; just below, a pair of binoculars for looking at the totally eclipsed sun. (DO NOT use binoculars or telescopes to look at the partial phases unless the instrument is equipped with effective solar filters.) I've also packed my cardboard VR goggles to watch the 3D 4K livestream of the eclipse from Volvo and CNN, as well as sunscreen and a hat for general use. (There's a myth that the sun is somehow more intense during a partial or solar eclipse and can cause sunburns more easily, but this is untrue.) At the top left, I've also packed a solar cellphone charger (in that rare event that the power goes out) and extra cellphone battery. (I ended up throwing a flashlight and batteries in my bag at the last minute.) I've also packed paper maps of the area we'll be traveling to, in the event that cellphone towers are overhwelmed and my GPS doesn't work. To the left, entertainment for the downtime — I'll have at least three days in Rexburg surrounding the main event, so there will be lots of game playing and book reading. I also packed an iPod, because once again, remember that cellphone networks will likely be swamped so music streaming services might not work on your car ride.

This guy is a celebrity to space nerds like me, and he'll also be watching the eclipse from eastern Idaho! (This region is an official NASA viewing site.) On Saturday night at the lovely Colonial Theater in Idaho Falls, Green delivered a talk about NASA's involvement with the movie "The Martian," and a screening of the film followed. Green mostly talked about how he got involved with the project and his interaction with the film's director, Ridley Scott, and a few of the film's stars. (Green only met Matt Damon a few minutes before the movie's premiere in Toronto, but he gave the actor a NASA "meatball" pin, which Damon then wore on his lapel while he walked the red carpet.)

Green spent a few minutes talking about some of the accurate and not-so-accurate aspects of the film. After the filmmakers chose the location of Ares 3, humanity's home base on Mars in the fictional world of the movie, Green went ahead and got some high-resolution images of that spot from the Mars Reconnaissance Orbiter (MRO). The spot is relatively flat, but astronauts on the surface would have a view of some crater rims that could rise up like rocky hills, and the filmmakers did a pretty good job of picking a spot on Earth (in Jordan) to look more or less like what the Ares 3 spot would actually look like on Mars, Green said.

He also addressed that darn Martian windstorm — it's the event that kicks off all the action in the movie, but in reality, winds on Mars are not even strong enough to straighten an American flag, Green said. He had an opportunity to ask Andy Weir (author of the book that "The Martian" movie is based on) why he included something so obviously scientifically inaccurate. ("You should know better!" Green allegedly told Weir.) The science fiction writer said the book was about man versus nature, and "I wanted nature to have the first punch!"

After Green's talk, my companions and I wandred into Marcellar's Vintage Wines and Brews, which had an entire section dedicated to eclipse wines!

Most of the wines simply had "moon" or "sun" in their title or on their labels, but two of the wines were made specifically for the Aug. 21 eclipse. We picked up two bottles of Total Eclipse wine (a 2016 pinot noir) from Eola Hills Wine Cellars. Their vineyards in Oregon lie directly in the path of totality. We've decided to save the bottles for a later date, and hope that the taste brings back memories of this great event.

It's eclipse day! The partial phase has reached Rexburg! More updates to come!

The total solar eclipse has passed over Rexburg! A crowd of probably 300 people watched the event on the front lawn of Riverside Park and made a ruckus like fans at a rock concert. The incroaching darkness was incredibly strange, and the vent itself was deeply moving. The 360-degree sunset effect was so vivid. We saw Venus and a handful of other stars and planets.

A crowd of about 300-400 people gathred on the front lawn of Riverside Park in Rexburg, and they reacted to the eclipse like fans at a rock concert. Watch the video below to see what I mean (or rather, listen to the audio; the video isn't much to look at but you can see the light change when totality begins, and you can briefly see a star or planet visible below the sun, before the camera adjusts to the light).

The reaction was well-earned. This was an event that made me shout with excitement; in many people's lives, there are so few things that can generate that kind of reaction. After seeing my first total eclipse, I can say for sure that I now have a strong appetite to see another one. Thank you Rexburg!