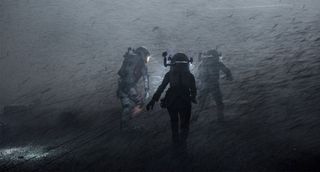 Without giving away too many spoilers about "The Martian", there's an opening scene in the book (and upcoming movie) in which a dust storm causes major damage and literally blows away an astronaut. But could that actually happen on the Red Planet?

Despite the amazing space travel details in "The Martian," a film based on the book by Andy Weir, that Mars dust storm scene, which ultimately sets up the entire film, is itself blown away by Red Planet realities.

It turns out the atmosphere on Mars is so thin that even a strong wind wouldn't make that much of a difference, according to a NASA planetary scientist who studies planetary dust storms regularly (though he hasn't read the book). "You would probably feel a breeze, but it wouldn't be knocking you over," Michael Smith, who works at the NASA Goddard Space Flight Center, told Space.com. ["The Martian": An Epic Space Film in Photos]

Back in 1971, when the Mariner 9 spacecraft arrived at Mars, a gargantuan dust storm engulfed the entire planet. Not much was known about Mars at the time. Scientists saw a set of odd circular shapes poking through the dust, but couldn't figure out what they were until storm settled. Then the scientists realized these circles were the tops of gigantic dormant volcanoes.

Global Red Planet dust storms are rare — there were others in 2001 and in 2007 — but local dust storms pop up frequently. The causes of global storms are still unclear, Smith said, although these tempests tend to happen during summer in the planet's southern hemisphere. The 2007 storm hit while the Spirit and Opportunity rovers were on the Martian surface. The rovers hunkered down and took pictures of the darkening sky.

Smith said a person standing on the planet's surface would have trouble seeing — how much trouble is unclear, but it would be darker. The grinding sand would also get into everything: spacesuits, habitats,  rovers and other equipment, Smith said.

"The dust is electrostatic, like foam peanuts," Smith said, adding that the 1-micron size of sand particles "is so small that it coats everything."

But the wind, even at 60 mph (97 km/hr), would seem more like a breeze, because the density of Martian air is only 1 percent that of Earth. With an understanding that wind force is a function of atmospheric density as well as velocity, calculations show the speed of a 60-mph storm on Mars would feel more like 6 mph (9.6 km/hr), Smith said.

"It's not blowing people over, but these are dramatic events and they would have real-world consequences," he said.

NASA's entire fleet of Mars spacecraft monitors dust storms, particularly in visible wavelengths and thermal wavelengths (which shows the density). The Mars Reconnaissance Orbiter is used for most observations.

In the past decade, MRO's Mars Climate Sounder has provided extensive information about the appearance of different layers of the atmosphere during dust storms, Smith said. Results indicate the density varies by altitude, making the storms even more complex than they look.

"The Martian," directed by Ridley Scott and based on the book by Andy Weir, opens in theaters nationwide on Oct. 2.