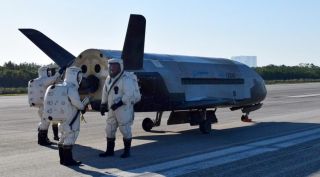 The United States Air Force's X-37B program is readying its next robotic mini-shuttle for launch, this time atop a SpaceX Falcon 9 rocket.

The liftoff is scheduled to take place in early September, according to media reports.

Capt. Annmarie Annicelli, a U.S. Air Force spokeswoman, told Inside Outer Space: "At this time, I do not have the launch date to release." [The Mysterious X-37B Space Plane: 6 Surprising Facts]

The upcoming X-37B mission — which is known as Orbital Test Vehicle-5 (OTV-5) — will lift off from Launch Complex 39A at NASA's Kennedy Space Center in Florida.

The Air Force is known to own two reusable X-37B space planes, which were built by Boeing. The vehicles look like miniature versions of NASA’s now-retired space shuttle orbiter; each X-37B is 29 feet (8.8 meters) long and 9.6 feet (2.9 m) tall, and each has a wingspan of nearly 15 feet (4.6 m).

The space drone has a payload bay about the size of a pickup truck bed that can be outfitted with a robotic arm. It has a launch weight of 11,000 lbs. (4,990 kilograms) and is powered on orbit by gallium- arsenide solar cells with lithium-ion batteries.

The Air Force has flown four X-37B missions to date. All of them were launched by Atlas V rockets, which are built by United Launch Alliance — a joint venture of Lockheed Martin and Boeing.

OTV-3 chalked up nearly 675 days in orbit, finally landing on Oct. 17, 2014. And OTV-4 conducted on-orbit experiments for 718 days during its mission, extending the total number of days spent in space for the X-37B program to 2,085 days.

On May 7, 2017, OTV-4 landed at NASA's Kennedy Space Center Shuttle Landing Facility — a first for the program, as all previous missions had ended with a tarmac touchdown at Vandenberg Air Force Base in California.

It's unclear what exactly the X-37B will be doing during OTV-5, or how long the mission will last. But, according to the Air Force, one onboard OTV-5 payload is the U.S. Air Force Research Laboratory’s Advanced Structurally Embedded Thermal Spreader, or ASETS-11. This instrument will test experimental electronics and oscillating heat pipes in the long-duration space environment.