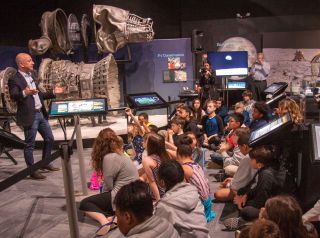 CAPE CANAVERAL, Fla. — Jeff Bezos, the billionaire mogul behind Amazon.com and the private spaceflight company Blue Origin, is passionate about space exploration as well as its historical roots.

At a July 15 gala here hosted by Apollo 11 moonwalker Buzz Aldrin, Bezos and other dignitaries celebrated the 48th anniversary of the first human landing on the moon in July 1969. Bezos also accepted the first annual Buzz Aldrin Space Innovation Award at the event.

Bezos' remarks at the gala included remembrances of his expedition to recover pieces of space-age history that were resting on the Atlantic Ocean seabed, 3 miles (4.8 kilometers) beneath the waves. [NASA Apollo Moon Rocket Engines Recovered by Jeff Bezos (Photos)]

In 2013, a Bezos-led search-and-recovery team successfully pulled from the Atlantic's depths some pieces of the huge Saturn V rockets that helped power Apollo astronauts to the moon in the late 1960s and early 1970s.

Retrieved were thrust chambers, gas generators, injectors, heat exchangers, turbines, fuel manifolds and dozens of other artifacts. Indeed, an item salvaged was later identified as one of the massive F1 engine thrust chambers from the historic Apollo 11 mission.

In late 2015, the first shipment of recovered artifacts from the Bezos expedition arrived at The Museum of Flight in Seattle for display.

Bezos said that he was sitting in his living room when the idea came to him to attempt salvaging the Apollo hardware. He thought of two main reasons for doing so.

And he knew that the Apollo 11 engines wouldn't remain in museum-display condition forever.

"They are dissolving away in the salt water. We should go get them and put them in a museum," Bezos said, describing his thoughts at the time.

This brainstorm inspired a bit of research.

"I messed around on the Internet for — I'm not kidding you — no more than 15 minutes," Bezos said. "I had the radar-tracked coordinates of where the booster stage of Apollo 11 impacted the surface of the ocean. And I thought, this was going to be so easy."

That turned out not to be the case, however.

"I underestimated the degree of difficulty," Bezos said.

But Bezos and his team managed to get the job done.

"Ultimately, it was a team of about 60 people using super-high technology," Bezos said, and "an adventure in its own right."

"And I took my parents with me. My mom was the only woman in this group of 60 men on this boat," Bezos said.

He added that the Norwegian boat captain advised Bezos when he boarded the boat that he had removed all the pornography, "out of respect" to Bezos' mother.

The items raised by the Bezos team in 2013 are now in public view at the Museum of Flight.

Opening this past May, the exhibit's centerpiece is an Apollo 12 F-1 engine that shows the scars of its service and the pressures of resting in the depths. For comparison, a full-scale F-1 rocket engine, on loan from NASA's Marshall Space Flight Center in Alabama, is also on display.

The raised artifacts help honor the huge team of engineers and scientists who made the Apollo moon landings possible, Bezos said.

"Those people gave us a fantastic service that is still paying us dividends today," he said.

Leonard David is author of "Mars: Our Future on the Red Planet," published by National Geographic. The book is a companion to the National Geographic Channel series "Mars." A longtime writer for Space.com, David has been reporting on the space industry for more than five decades. Follow us @Spacedotcom, Facebook or Google+. This version of this story was posted Space.com.