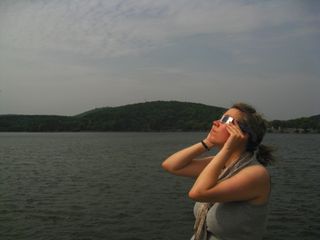 Paul Sutter is an astrophysicist at The Ohio State University and the chief scientist at COSI science center. Sutter leads science-themed tours around the world at AstroTouring.com. Sutter contributed this article to Space.com's Expert Voices: Op-Ed & Insights.

In the 1690s, astronomer Edmund Halley had a problem. He was good buddies with Isaac Newton, and a decade earlier had encouraged Newton to publish his monumental "Principia," which showed just how universal the so-called "gravitational force" really was.

Newton's work enabled Halley and company to make all sorts of celestial predictions to ridiculous levels of accuracy. That included predicting the timing of a total solar eclipse over England in 1715 that was off by only 4 minutes. Fantastic! So, Halley went to work studying historical records of eclipses available to him, which stretched back thousands of years thanks to the astute astronomers in the court of the Chinese emperors. [Here's What Scientists Have Learned from Total Solar Eclipses]

And things weren't lining up. Calculations of ancient eclipses began to drift from the historical records, and the further back in time Halley went, the worse the discrepancy got. If the histories were to be believed, eclipses were steadily getting further apart. Not perceptibly, but only over the course of thousands of years.

What was going on? Was the rotation of the Earth slowing down? Was the moon getting farther away?

It took future generations of astronomers and physicists to put the puzzle pieces together, but the Earth's rotation is indeed slowing down, and the moon is slowly getting farther away — and these two effects are connected. The connection is the tides.

The moon raises tides on opposite ends of the Earth, but Earth is rotating, so it carries the tides slightly ahead of the moon's position in its orbit. Thus, from the moon's perspective, there's an extra lump of water ahead of it. The gravitational pull of this lump acts like a leash, tugging on the moon and sending it into a higher orbit. As a consequence of this boost, the Earth has to lose a little bit of energy, and slows down a wee bit.

We see this process played out around the solar system; the end result is tidal locking, with the same side of an object always facing its orbital companion. This already happened to the moon long ago, so it always faces the same side toward the planet, and slowly it will happen to the Earth, too. Pluto and its largest moon Charon are already tidally locked, as well as many small moons of the giant planets in Earth's solar system.

The tidal interactions between the Earth and the moon aren't very big — we are separating at the snail-like pace of 1.5 inches (3.8 centimeters) a year. But with every decade, century and millennium, the moon's apparent size in the sky shrinks, making total solar eclipses ever rarer.

Eventually, after 620 million years, the moon will be too small in the sky to fully cover the face of the sun, and total eclipses will be no more. Actually, it will be sooner than that, because as the sun ages, it steadily grows larger. But that's another story.