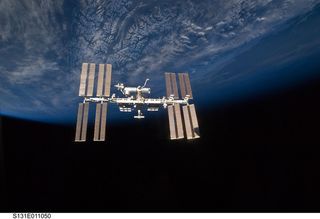 The International Space Station as seen in a photo taken in 2010.
(Image: © NASA)

In an effort to find new treatments for Parkinson's disease, researchers are sending their experiments to space.

This Monday (Aug. 14), researchers will launch a key Parkinson's disease protein, called LRRK2, to the International Space Station (ISS). The microgravity conditions in space should offer a better test environment for their experiments with this protein, the researchers said.

The materials for their experiments will travel aboard the SpaceX Dragon capsule as part of a mission to send supplies and science experiments to the ISS.

The work is a collaboration between The Michael J. Fox Foundation for Parkinson's Research and the Center for the Advancement of Science in Space (CASIS).

LRRK2 is a type of protein that modifies other proteins. Mutations in the gene that codes for LRRK2 are thought to cause Parkinson's disease in some people. Researchers have hypothesized that developing drugs to inhibit LRRK2, or block its activity, could help prevent Parkinson's or slow its progression. [10 Celebrities with Chronic Illnesses]

But before scientists can develop a drug to inhibit LRRK2, they need to know the precise structure of this protein. One way to get a detailed view of its structure is by growing crystals of LRRK2 in lab dishes. However, on Earth, gravity can interfere with the growth of these crystals, and keep them small.

"The quality of our crystals is just not good enough [on Earth]," Sebastian Mathea, a researcher at the University of Oxford who is involved in the LRRK2 project, said during a news conference about the project Tuesday (Aug. 8).

This is where the ISS research comes in: Researchers hope that the microgravity conditions in space will allow the crystals to grow bigger with fewer defects. The scientists can then get a sharper view of the crystal structure.

Scientists will grow the LRRK2 crystals for about a month in space. Then, the crystals will be sent back to Earth, where they will be analyzed with high-energy X-rays, Mathea said.

Parkinson's disease is a progressive neurological disorder that affects people's movement abilities, and can result in symptoms such as tremors, slowed movements and muscle stiffness. There are currently no treatments to stop or reverse the progression of the disease, according to The Michael J. Fox Foundation.