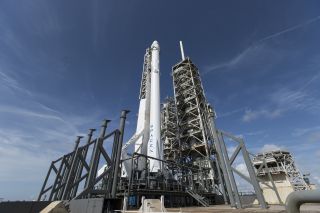 A SpaceX Falcon 9 rocket and Dragon cargo ship stand atop Pad 39A at NASA's Kennedy Space Center in Florida for the CRS-11 mission in June 2017. SpaceX will launch a new Dragon cargo ship to the International Space Station on the CRS-12 cargo mission for NASA on Aug. 14, 2017.
(Image: © SpaceX)

A SpaceX Falcon 9 rocket will launch the last brand-new Dragon cargo spacecraft to the International Space Station (ISS) Monday (Aug. 14), and you can watch all the action live online.

The Falcon 9 is slated to blast off from at 12:31 p.m. ET (1631 GMT) from Launch Complex 39A at NASA's Kennedy Space Center in Florida. About 10 minutes later, the rocket's first stage will separate and head back to Earth to stick an upright landing. You can watch the launch live on Space.com here, courtesy of NASA TV's livestream. You can also watch SpaceX's own webcast here.

Monday's launch marks the 12th cargo resupply mission SpaceX has launched to the space station under the Commercial Resupply Services contract the company signed with NASA in 2008. Originally the contract called for only 12 launches, but SpaceX has since extended that agreement to include 20 cargo missions. While this won't be the last cargo launch for SpaceX, it will be the last time the company launches a brand-new Dragon spacecraft. From now on, only reused Dragon spacecraft will fly to the International Space Station, SpaceX representatives said Sunday (Aug. 13). [Gallery: Dragon, SpaceX's Private Spacecraft]

The Dragon will deliver more than 6,400 lbs. (2,900 kg) of science experiments, hardware and supplies for the Expeditions 52 and 53 crewmembers after a two-day trek through low-Earth orbit. On Wednesday (Aug. 16) at about 7 a.m. EDT (1100 GMT), NASA astronaut Jack Fischer will use the space station's robotic arm to grapple the spacecraft from inside the Cupola window. Canadarm2 will then install the Dragon on the bottom of the space station's Harmony module, where it will stay for about a month.

Opening of the hatch and unloading of the cargo isn't on the crew's schedule until Thursday, but the crew may try to get a head start to get their hands on some particularly delicious frozen cargo — ice cream. "I think the crew is aware that there are some frozen treats on this particular mission, so I wouldn't be surprised if they work long in the day and try to open the hatch and enjoy some," said Dan Hartman, deputy ISS Program manager at Johnson Space Center in Houston, at a briefing on Sunday (Aug. 13).

Supplies for the crew only make up a small portion (less than 8 percent) of the cargo packed inside the Dragon spacecraft. Nearly 75 percent of the cargo weight consists of science experiments that other equipment that will support dozens of research investigations conducted by the crews of Expeditions 52 and 53.

One notable biology experiment will research new treatments for Parkinson's disease by studying a key protein, LRRK2, in a microgravity environment. Another experiment will test strategies for growing lung tissue from stem cells, a bioengineering technique that could one day repair damaged organs and reduce organ rejection. Also aboard the Dragon will be 20 live mice, which will help scientists understand the physiological effects of long-duration spaceflight.

One investigation by the private company NanoRacks and sponsored by the U.S. Department of Defense aims to validate the concept of using microsatellites with imaging systems to support critical military operations. And outside the space station, an astrophysics observatory known as Cosmic Ray Energetics and Mass for the International Space Station (ISS-CREAM) will measure the charges of cosmic rays with a balloon-borne experiment.

Some young, aspiring scientists with Boy Scout Troop 209, based in Chicago, will also send an experiment into space on this Dragon launch. They will study how bacteria exposed to cancer-causing agents mutate in microgravity and on Earth. Their findings could have implications for future cancer research.

Because the ISS crew has a busy week ahead, SpaceX only has one shot to launch this Dragon. If Monday's launch is scrubbed, the next launch window will open no earlier than Saturday (Aug. 19), Hartman said, calling Monday's launch "a one-attempt."

Rescheduling the launch for Tuesday (Aug. 15) would put the Dragon’s arrival date at the same time as a Russian spacewalk on Aug. 17. Then on Aug. 18, NASA's Tracking and Data Relay Satellite will launch from Kennedy Space Center as well.

As of Sunday evening, the weather forecast is 70 percent favorable for launch. "Primary weather concerns will be cumulus clouds and flight through precipitation, although the early afternoon launch time is promising," NASA officials said.