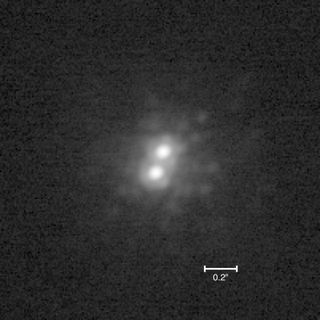 A pair of objects drifting in interstellar space may look like a rogue "double planet," but it's actually two failed stars, a new study finds.The duo is the most lightweight binary system ever discovered and may be the closest approximation of a free-floating "double planet" that astronomers have found so far.

This previous research estimated that the mass of this object, also known as 2M1119, was four to eight times that of Jupiter. This suggested it was a brown dwarf, also known as a failed star. [Brown Dwarfs: Strange Failed Stars of the Universe Explained (Infographic)]

Brown dwarfs, like regular stars, begin as clouds of gas and dust that collapse under their own gravity. However, brown dwarfs lack the mass to squeeze atoms enough to trigger nuclear fusion. Instead, they are not quite planets and not quite stars.

Now, with the aid of the Keck II telescope in Hawaii, scientists have found that 2M1119 is actually two brown dwarfs, of equal brightness, orbiting each other.

"The fact that it was a binary, not another boring single system, was completely new," study co-author Trent Dupuy, an astronomer at the University of Texas at Austin, told Space.com. "Maybe it means that planetary-mass objects can form like stars and also, very rarely, form like binary stars."

To learn more about this binary, the researchers analyzed a collection of a few dozen 10-million-year-old stars located about 23 light-years from the pair. Known as the TW Hydrae Association, this is the youngest group of stars near Earth's solar system. It measures about 260 light-years across and, as a whole, is about 130 to 195 light-years from Earth, Dupuy said.

Based on the position and motion of 2M1119, the scientists found that there was an 82 percent chance that it was a member of the TW Hydrae Association. This suggested that 2M1119, too, was about 10 million years old. This knowledge, in combination with the spectrum of light detected from 2M1119, helped the researchers calculate other properties of the brown dwarfs.

The scientists estimated that the brown dwarfs in this pair are separated by about 334 million miles (538 million kilometers), or slightly less than four times the distance between Earth and the sun. The mass of each brown dwarf is about 3.7 times that of Jupiter, which makes the pair the lowest-mass binary system discovered to date outside Earth's solar system.

"No one has ever found a binary brown dwarf that has components that are this low in mass," said study lead author William Best, an astronomer at the University of Hawaii at Honolulu. "We weren't sure a binary like this could even exist."

Whether these newfound bodies should be called planets or brown dwarfs is a tricky question, Best said.

"The components of 2M1119 fit the International Astronomical Union definition for planet — less than 13 Jupiter masses — and similar single objects have recently been called 'lonely planets' or 'rogue planets,'" Best told Space.com. "But we also commonly think of planets as things that are orbiting stars. In that sense, 'rogue planets' are not planets at all because they are not orbiting stars — they are floating out in space by themselves, and almost certainly formed like stars do. So, objects like this challenge our definitions of planet and brown dwarf.

"Bottom line — 2M1119 does not obviously fit into either of the planet and brown dwarf boxes," Best added. "I think the most accurate description for 2M1119 is 'planetary-mass binary brown dwarf.' I realize that's an unpoetic mouthful — 'lonely double planet' is certainly prettier. Hopefully, we'll develop a better definition in the future."

Brown dwarfs are thought to form the way stars do, Best said. "One open question in astronomy is, 'What is the smallest-mass brown dwarf that can form, and what is the lowest-mass binary that can form — that is, how low can star formation go?'" Best said. "This discovery sets a new record for binaries. Anyone working on the theory of how stars and brown dwarfs form needs to be able to explain how this binary formed. And there may be even lower-mass ones out there."

The scientists detailed their findings online June 23 in The Astrophysical Journal Letters.