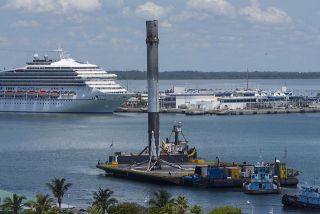 The first stage of the SpaceX Falcon 9 rocket that launched the Thaicom 8 communications satellite comes into Florida’s Port Canaveral on June 2, 2016. The roof of a SpaceX building in Port Canaveral that houses such landed rocket stages caught fire on July 16, 2017, but no hardware was damaged, SpaceX representatives said.
(Image: © SpaceX)

A SpaceX building on the Florida coast caught fire over the weekend, but firefighters put out the blaze before it damaged the spaceflight gear inside, company representatives said.

The fire was reported Sunday afternoon (July 16) in Port Canaveral, on the roof of a large building that SpaceX uses to store the first stages of Falcon 9 rockets that have landed back on Earth during orbital missions, according to Florida's WESH 2 News.

"The large building and difficulty reaching the fire made the job tough," WESH 2 reported. "Firefighters wearing lots of heavy protective gear and equipment had to climb 75-foot-tall [23 meters] ladders in the hot Florida afternoon sun to reach the blaze. One firefighter experienced heat stress, and was taken to a hospital to be checked. There were no other injuries."

Firefighters had to peel back the roof to make sure that the flames had been doused completely, according to WESH 2 News.

In a statement provided to WESH 2, a SpaceX spokesman described the fire as "small" and thanked the Canaveral Fire Rescue and the Brevard County Fire Rescue teams for responding so quickly.

"There was no damage to any SpaceX equipment or hardware as a result of the fire," the statement added. "The cause of the fire is under investigation."