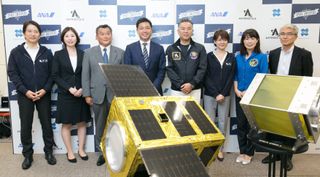 The four-year old company, which opened a research and development office in Japan in 2015 and a branch location in the United Kingdom this year, completed the Series C round with a mix of venture capitalists and private companies.

Astroscale has a 22-kilogram small satellite slated to launch on a Soyuz rocket through Russian company Glavkosmos in 2018 from either the Baikonur Cosmodrome in Kazakhstan or Russia's new Vostochny Cosmodrome in the country's far east. That satellite, called "Idea OSG-1," is for monitoring sub-millimeter-sized debris. Astroscale estimates roughly 750,000 debris objects greater than one centimeter in diameter orbit the Earth today.

A second satellite called "ELSA-d" will demonstrate technology for deorbiting dead satellites. Astroscale has not announced the second launcher, but anticipates having ELSA-d in orbit during the first half of 2019.

"This funding commitment indicates the growing international awareness that space debris must be confronted in order to safeguard future space use and advance discussions on Space Traffic Management (STM)," Nobu Okada, founder and CEO of Astroscale, said in a July 14 statement.

Okada said Astroscale anticipates its investor and partner OSG "will not only supply high quality instruments but will also contribute to the mass production of space debris removal satellites." He said Astroscale also plans to leverage the operational safety and aeronautical expertise of investor ANA, which owns All Nippon Airways.

The need for space debris removal has catalyzed many business ideas and technology demonstration missions, but few have gained substantial financial traction, largely because of questions surrounding who will pay for debris removal services and who would be liable in the event of an accident. Astroscale, whose business plan includes both debris removal and space situational awareness services, has so far bucked that trend.

Using its new funds, Astroscale intends to hire a chief operating officer the company describes as having "played a significant role in the field of space policy in a variety of influential positions regarding international relations." That person will join the company August 1. Astroscale also plans to use its funding to further expand internationally.