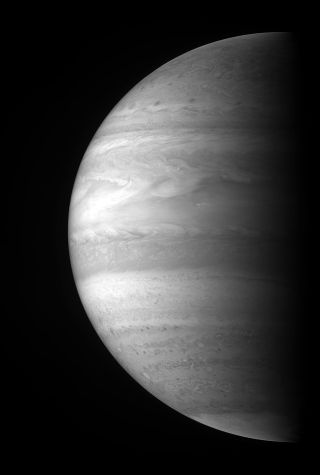 New images beamed back by a NASA spacecraft that flew by Jupiter earlier this year are giving scientists their most detailed glimpse yet of the gas giant and its moons.

On Feb. 28, New Horizons passed within 1.4 million miles (2.3 million kilometers) of Jupiter as part of a slingshot maneuver to give it a speed boost as it races toward its main target Pluto. During the move, the spacecraft snapped hundreds of images of the Jupiter system.

Some of those images, unveiled today during a NASA news conference, reveal never-before-seen features of the planet and its moons. New Horizons' principal investigator, Alan Stern, said New Horizons' Jupiter flyby was "successful beyond our wildest dreams."

"This is the eighth mission to Jupiter, and it gives us a chance for the first time to take these modern instruments in close where Cassini couldn't go and with the bandwidth that Galileo couldn't deliver to really unveil new views of the system," Stern said.

Among the new images unveiled today is one showing Jupiter's high altitude clouds and a haze at the planet's south pole probably formed by charged particles transported there during one of the gas giant's auroras.

Another image provides the best picture yet of Jupiter's charcoal-black rings. "Most people didn't realize Jupiter had rings. When you say rings, most people think of Saturn," said New Horizons scientist Jeff Moore of NASA's Ames Research Center. "By incredible good luck, we happened to be at the right trajectory with the right instruments to study these."

There are images capturing several simultaneous volcanic eruptions on Jupiter's moon Io and one of a volcanic plume jettisoned up 200 miles above the moon's surface. Another picture shows in stunning detail Jupiter's Little Red Spot, a new storm system that is smaller than the planet's famous Great Red Spot.

"It's sort of reminiscent of Van Gogh's Starry Night painting," said Hal Weaver, a New Horizons project scientist at John Hopkins University. "But this is the real deal. It's not in somebody's imagination."

Stern's favorite image shows Jupiter's icy moon Europa rising above the Jupiter cloud tops. The shot is one of many the spacecraft was programmed to take for artistic, rather than scientific, purposes.

"I'd say if you haven't been to Jupiter yet, you have now, and New Horizons has taken you there," Stern said.

New Horizons' images are providing scientists with a bounty of new data to analyze, and there is still more to come. "We are only about 70 percent of the way through the playback," said John Spencer, New Horizon's deputy lead researcher. "The data is still coming down every morning. It's going to be kind of sad in a few weeks when we finally stop getting this daily fix of new exciting stuff and we have to actually sit down and write up our papers."

The Jupiter flyby came just 13 months after New Horizon's launch, and was a dress rehearsal for its rendezvous with Pluto in 2015. The instruments performed so well that the team will veer from its original plan and prepare for the Pluto mission early.

"We've really learned how to drive this spacecraft," Stern said. "The people that did the Jupiter encounter are now charged in the coming year and a half with designing and writing all the code for the spacecraft to execute during its Pluto encounter."

The original plan was to put New Horizons into hibernation for several years after the Jupiter flyby before waking it again to prepare for Pluto. "We've instead decided that the team is so expert now and they're at the peak of their performance that we're going to be designing and writing all the code in '07 and '08 and doing our first rehearsal of the Pluto encounter in 2009," Stern said.

"We've now proven what power this spacecraft's instrument suite has, and now we're taking it out into the complete unknown, where everything will be completely new and where it will be raining data in 2015," Stern said.