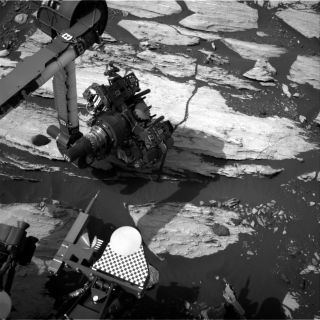 The drill at the end of Curiosity’s robotic arm is visible in this photo, which was taken by one of the Mars rover’s navigation cameras.
(Image: © NASA/JPL-Caltech/MSSS)

More than seven months after a malfunction sidelined the rock-boring drill aboard NASA's Curiosity Mars rover, mission team members are still trying to find a solution, or a work-around.

On Dec. 1, 2016, Curiosity detected a problem with its drill feed mechanism, which moves the drill at the end of the rover's 7-foot-long (2.1 meters) robotic arm forward and backward. The car-size robot hasn't drilled any rocks since then.

Rover engineers haven't given up hope of fixing the mechanism, but they're also now investigating new and inventive ways to drill, NASA officials said.

Other possible strategies include drilling without the two small posts that Curiosity normally places against a rock, one on each side of the bit, for stability during drilling operations, Lee added.

Mission engineers are also looking at different ways of delivering the powder collected during drill operations to instruments on Curiosity's body — for example, by using the robotic arm's soil scoop, NASA officials said.

This isn't the first time a drill issue has afflicted Curiosity. For example, the rover experienced intermittent short circuits in the drill's hammering mechanism several times over the past few years.

Curiosity has drilled into 15 different rocks since landing inside Mars' 96-mile-wide (154 kilometers) Gale Crater in August 2012. Analyses of these drilled samples have been key to the $2.5 billion mission's biggest discoveries, including the determination that Gale hosted a potentially habitable lake-and-stream system billions of years ago.

Since September 2014, Curiosity has been climbing through the foothills of Mount Sharp, which towers 3.4 miles (5.5 km) into the Martian sky from Gale's center. The six-wheeled rover is studying the various rock layers as it goes, looking for clues about Mars' transition from a warm and wet world in the ancient past to the cold, dry planet it is today.