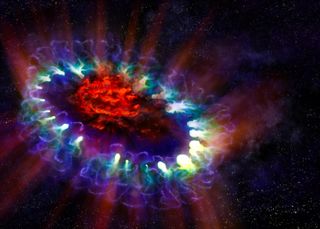 This artist's illustration of SN 1987A reveals the cold inner regions of the exploded star's remnants (red), where tremendous amounts of dust were detected and imaged by ALMA. This inner region differs from the outer shell (blue), where the energy from the supernova is colliding (green) with the envelope of gas ejected from the star before its detonation.
(Image: © A. Angelich; NRAO/AUI/NSF)

New looks at the heart of a supernova remnant are revealing clues about the deaths of massive stars and how these dramatic events affect their host galaxies, two recent studies report.

Observations made by the Atacama Large Millimeter/submillimeter Array (ALMA) in Chile allowed one research team to construct a detailed 3D map of SN 1987A — the remains of a huge star that exploded three decades ago — and another group to spot several molecules previously undetected in the supernova remnant.

"When this supernova exploded, now more than 30 years ago, astronomers knew much less about the way these events reshape interstellar space and how the hot, glowing debris from an exploded star eventually cools and produces new molecules," Rémy Indebetouw, an astronomer at the University of Virginia and the National Radio Astronomy Observatory in Charlottesville, said in a statement. [Supernova Photos: Great Images of Star Explosions]

"Thanks to ALMA, we can finally see cold 'star dust' as it forms, revealing important insights into the original star itself and the way supernovas create the basic building blocks of planets," added Indebetouw, who is a co-author on both recent studies.

SN 1987A formed in the aftermath of a Type II supernova, which results when a star at least 10 times more massive than the sun runs out of fuel and ceases pushing outward against the inward pull of its own gravity. The big star's outer parts then come crashing back on the core, sparking a mammoth explosion that can be seen from great distances.

Indeed, SN 1987A lies 163,000 light-years away, in the Large Magellanic Cloud galaxy, and has been studied intensively by a variety of instruments since its light first reached Earth in February 1987. (The explosion actually occurred about 163,000 years ago, of course, but astronomers such as Indebetouw often refer to it happening in 1987 for simplicity's sake.)

The supernova sent huge amounts of dust streaming into space, creating a veil that many telescopes have had trouble penetrating. And that's where the newly reported ALMA observations come in: The radio dishes in the array can peer through the dust, revealing the structure deep within the remnant.

In one of the recent studies, scientists mapped out in 3D the abundances of many molecules that formed in the aftermath of the massive explosion (after SN 1987A had cooled sufficiently to allow this to happen). For example, the ALMA data revealed large amounts of silicon monoxide (SiO) and carbon monoxide (CO) clumping in the remnant's heart, researchers said.

The other study team performed a molecular inventory of SN 1987A. They found a number of species, including the new detections formyl cation (HCO+) and sulfur monoxide (SO).

"These molecules had never been detected in a young supernova remnant before," Indebetouw said. "HCO+ is especially interesting, because its formation requires particularly vigorous mixing during the explosion."

Overall, the combined results reveal new insights about SN 1987A's composition and how conditions within the supernova remnant have changed over time, researchers said. This information, in turn, could help astronomers better understand galactic evolution.

"The reason some galaxies have the appearance that they do today is in large part because of the supernovas that have occurred in them," Indebetouw said. "Though less than 10 percent of stars become supernovas, they nonetheless are key to the evolution of galaxies."

The 3D-mapping study was published last month in The Astrophysical Journal Letters, and the molecular-inventory paper was published in April in the Monthly Notices of the Royal Astronomical Society.