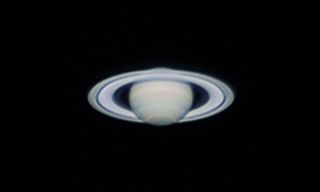 Skywatchers can get a good view of Saturn — captured here by astrophotographer Andrew Kwon in 2014 — throughout July.
(Image: © Andrew Kwon)

Skywatchers have a rare chance to easily locate Saturn as it passes close by the moon Thursday night (July 6), its famous rings wide open to our line of sight.

Next to the moon, the object that most people want to see in a telescope is the ringed planet Saturn, I've found — yet even folks who own a telescope often express in somewhat exasperated tones that they have yet to see it. Their chief problem is making a positive identification. Certainly, there is no such problem in finding the moon and some of the other bright naked-eye planets.

Case in point: Right now Jupiter can be immediately identified high in the west-southwest sky soon after sunset; it's by far, the brightest star-like object in our current evening sky. There is no mistaking Venus' great brilliance, now glowing low in the east just before sunrise. And when Mars is close to Earth and bright (as will be the case at this time next year), skywatchers can immediately recognize it by its distinctive fiery orange color.[The Brightest Planets in July's Night Sky: How to See them (and When)]

Yet to the naked eye there really isn't anything distinctive about Saturn.

The ringed planet appears as a bright "star" shining with a steady, sedate yellow-white glow, but it isn't as eye-catching as Venus or Jupiter. Indeed, I suspect that many neophytes to astronomy likely have passed over it visually without knowing exactly what it is. Some nearby benchmark would certainly help to guide one to it.

About 1 hour after sunset, look toward the south-southeast sky. Roughly one-quarter up from the horizon to the point overhead will be a nearly full moon, 96 percent illuminated by the sun. (The moon will officially turn full during the overnight hours late next Saturday night, July 8.)

Hovering less than 3 degrees below the moon you'll see a bright, yellowish-white "star" shining with a steady glow. And that will be Saturn.

How easy is that?

With Saturn properly identified, if you have a telescope and have never seen the "lord of the rings," you can finally catch a glimpse. Any telescope magnifying more than 30-power will show the rings. They consist of billions of particles ranging in size from sand grains to flying mountains, which are made of — or covered by — water ice. This would account for their very high reflectivity. The reason that "rings" is plural and not singular is that gaps of brightness differences define distinct sets of rings.

Right now, the north side of the rings is tilted 26.7-degrees toward Earth. They haven't been this wide open since June of 2003, so now is a great time to check them out.

And if clouds hide your view of Saturn and the moon, don't fret. You'll have another chance to see moon near to Saturn (though not as close as on Thursday) on Wednesday evening (Aug. 2).