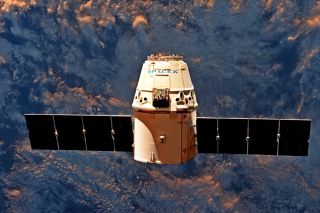 The first two pictures show the Dragon space capsule attached to the ISS' robot arm, called Canadarm2, and the capsule moving away from the station. The last one shows a silhouetted Earth and the Dragon streaking through the atmosphere on its way down.

The Dragon capsule, built and launched by Elon Musk's private spaceflight company SpaceX, is the first private cargo spacecraft to make a second delivery to the station. The vehicle was refurbished following its first delivery mission, which launched in September 2014.

"And there goes #Dragon … Goodbye to our 1st return visitor since Atlantis in 2011--Come on back anytime, we’ll leave the lights on for you!" ;Fischer tweeted about the departing vehicle. His tweet refers to the final flight of the Space Shuttle Atlantis, a reusable crewed vehicle that operated for almost 25 years.

The Dragon ferried some 6,000 pounds (2,700 kilograms) of cargo to the space station and brought back 4,100 pounds (1,900 kg). Some of that returning cargo includes experiments that were sent to the space station previously, which will be analyzed in laboratories on Earth. Among the experiments were samples from mice used in testing an osteoporosis drug and one looking at the impact of microgravity on stem cells, according to a statement from NASA. The osteoporosis drug could be of particular importance to future space crews as it might help arrest the bone loss that is a symptom of long periods in microgravity, the statement said.

SpaceX's Dragon is currently the only space vehicle that can bring cargo to orbit and return intact; other operating cargo carriers — Orbital ATK's Cygnus spacecraft, Russia's Progress freighter and Japan's H-II Transfer Vehicle — are designed to burn up in the atmosphere after one use. Reusable vehicles could reduce the cost of launches if the cost of refurbishing and repairing the vehicle is lower than the cost of building a new one.

Another Dragon launch to the ISS is scheduled for Aug. 1, to be followed by another in November.