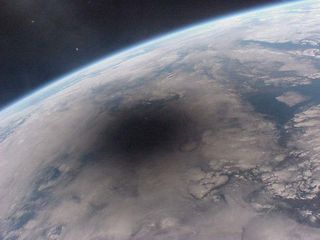 The moon's shadow on the Earth during a total solar eclipse.
(Image: © CNES)

The total solar eclipse that will cross the continental U.S. from coast to coast is only two months away. On Aug. 21, millions of people are expected to commute into the path of totality to see this amazing celestial sight — including some of the staff of Space.com.

Four of our staff members — including myself — will be traveling to see the total eclipse. The eclipse will be visible along a path that stretches from Oregon to South Carolina, so there are plenty of places for people to see the total eclipse. There are many good reasons to select one location over another, including the availability of lodging, the likelihood of good weather, and local events.

"When you have such a wide path to choose from, picking an observation site can be a huge challenge!" said Space.com's Managing Editor Tariq Malik, who will be in Carbondale, Illinois, for the eclipse, where Southern Illinois University (SIU) will host a massive festival celebrating the eclipse. About 45,000 people are expected to attend. [The Best ISO-Certified Gear to See the 2017 Solar Eclipse]

Carbondale is one of NASA's broadcast locations along the eclipse path, so the day's festivities will include a live presentation featuring eclipse experts. The American Astronomical Society will use Carbondale as its home base for the eclipse, and will also be part of the live program. The NASA Edge video podcast team will be hosting their live coast-to-coast coverage of the solar eclipse from SIU’s Saluki Stadium. The event organizers will be launching balloons from the stadium to study the eclipse.

There are at least two dozen eclipse festivals and organized public events happening at different locations in the eclipse path. Many of these festivals will begin three or four days before Aug. 21, so visitors can arrive early. Some of these festivals will have more of a science focus than others, so check out the individual festival websites to see what activities interest you the most.

"I’ve never seen a total solar eclipse before in all my 40 years, so this definitely is one celestial event I’m looking forward to seeing in person," Malik said. "I only hope the weather is clear!"

Weather was a major factor in my own decision to head to western Idaho for the eclipse. The above map was created by the National Oceanic and Atmospheric Administration (NOAA) and shows the likelihood of cloud cover along the eclipse path. (This is based on historical data and is not a forecast for the day of the eclipse.)

In the middle of August, some of the more humid parts of the country may get cloudy weather. If the sky is cloudy during the eclipse, people on the ground will still notice the loss of light when the moon covers the face of the sun. But they won't be able to see the layers of the sun's atmosphere that become visible during totality.

Because I'm a person who likes to plan for every possible scenario, I thought it best to select a viewing site with an extremely low chance of cloud cover. The next total eclipse that will be visible from the continental U.S. is in 2024, and I don't want to have to wait that long to see another one.

I also knew I'd be spending between two and four days in the eclipse path, so I wanted to select a location that I would enjoy visiting anyway. I love the scenery out west, and am planning to visit the nearby Craters of the Moon National Park.

There are 20 national parks and many national trails in the path of the eclipse. Some of the national parks will host eclipse-related events; others are in extremely remote locations. I'll be close to Grand Teton National Park, but I'm choosing not to drive there because of the huge crowds that are expected to be there. Getting to Grand Teton requires driving through the mountains on some small highways, whereas my chosen location in Idaho is close to a major highway, which will, I hope, cut down on the time I spend in traffic.

A place to lay your head

Space.com staff writer Sarah Lewin and staff writer/producer Hanneke Weitering will both be in the southeast quadrant of the country for the big event.

"I'll be at the Adventure Science Center in Nashville," Weitering said. "They're throwing a three-day eclipse festival and viewing party, and they're featuring a new solar eclipse planetarium program written by Mark Littmann, co-author of the book, 'Totality: The Great American Eclipses of 2017 and 2024,' [Oxford University Press, 2008] with Fred Espenak, and my old science writing professor/mentor at UT Knoxville."

But perhaps the biggest reason Weitering chose her particular location: a free room.

"My in-laws conveniently live in Nashville, so I don't have to worry about finding a hotel with a vacancy," she said.

Lewin will be watching the eclipse from a friend's cabin in Bryson City, North Carolina, close to Great Smoky Mountains National Park.

While I'm camping outside in the August heat, Lewin and Weitering will both be enjoying indoor accommodations that, hopefully, will include air conditioning.

Some Space.com staffers will be staying home for the total solar eclipse, and enjoying the partial eclipse that will be visible throughout the U.S. (including Hawaii and Alaska), as well as central America, parts of South America, Greenland and Iceland.

For many people, traveling into the path may simply not be possible. But skywatchers should be aware that the total solar eclipse is a very different phenomenon from a partial solar eclipse — even for observers in a location where 99 percent of the sun is covered, most of the effects of a total solar eclipse will still not be visible.

However, if you are unable to travel to see the total solar eclipse, you can watch the action on NASA TV. The agency will have broadcast stations capturing views of the eclipse all the way along the path.

Tell us where you'll be watching the eclipse, and your reasons for choosing that location.