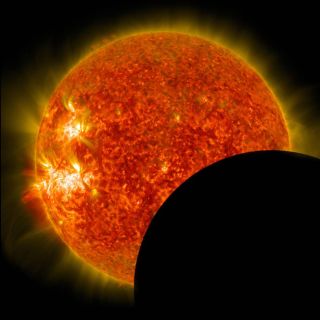 NASA's space-based Solar Dynamics Observatory captured a shot of a moon crossing in front of the sun on Jan. 30, 2014.
(Image: © NASA)

On Wednesday (June 21), exactly two months before the total solar eclipse that will cross the continental U.S. on Aug. 21, NASA will webcast two news briefings to discuss eclipse science, safety, and travel information.

"Representatives from NASA, other federal agencies and science organizations, will provide important viewing safety, travel and science information during two briefings," the agency said in a statement.

The first webcast will focus on eclipse safety and logistics, including the anticipated crowd sizes and traffic levels. Speakers will include Thomas Zurbuchen, associate administrator of NASA's Science Mission Directorate; Vanessa Griffin, director of the National Oceanic and Atmospheric Administration's Office of Satellite and Product Operations; Brian Carlstrom, deputy associate director of natural resource stewardship and science at the National Park Service; and Martin Knopp, associate administrator of the Office of Operations in the Federal Highway Administration at the U.S. Department of Transportation.

The second briefing will focus on the science of the eclipse. Speakers will include Zurbuchen; Angela Des Jardins, principal investigator of the Eclipse Ballooning Project at Montana State University; Angela Speck, professor of astrophysics and director of astronomy at the University of Missouri; David Boboltz, program director of solar physics in the division of astronomical sciences at the National Science Foundation in Arlington, Virginia; Linda Shore, executive director of the Astronomical Society of the Pacific, in San Francisco; and Matt Penn, an astronomer at the National Solar Observatory in Tucson, Arizona.

The total solar eclipse will cross the U.S. along a path that averages about 70 miles (113 kilometers) wide. Under the moon's shadow, daylight will turn into twilight, and the twisted atmosphere of the sun will become visible. The shadow will move across the country at 2,288 mph (3,682 km/h), and totality will last for less than 3 minutes in any single location. The exact duration and time when totality will occur depends on where an observer is in the path. Outside the path of totality and all across North America, a partial solar eclipse will be visible.

"The eclipse will provide a unique opportunity to study the sun, Earth, moon and their interaction because of the eclipse's long path over land coast to coast," NASA officials said in the statement. "Scientists will be able to take ground-based and airborne observations over a period of an hour and a half to complement the wealth of data and images provided by space assets."

The day of the eclipse is expected to be one of the worst traffic days in American history, and observers who plan to commute into the eclipse path should plan accordingly.