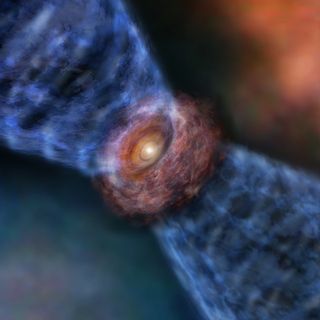 An artist's impression of the massive protostar Orion KL Source I. Researchers recently used the ALMA telescope in Chile to precisely measure the rotating gases flowing out from the baby star as it forms.
(Image: © ALMA (ESO/NAOJ/NRAO))

Astronomers using the powerful Atacama Large Millimeter/submillimeter Array (ALMA) in Chile have precisely measured the rotating fountains of gas flowing out from a massive newborn star, revealing the complex interplay between the star's magnetism and centrifugal forces.

Astronomers are still puzzled by the way massive stars form in interstellar space, the new study's researchers said in a statement. When a massive rotating cloud of gas collapses under gravity, stellar fusion becomes possible, and a baby star is born. As angular momentum is conserved while the cloud shrinks, the resulting baby star should be spinning very fast, according to the laws of physics.

To get a better idea of the conservation of angular (or rotational) momentum, imagine a spinning ice-skater. As ice-skaters spin with their arms outstretched, they spin slowly; when they bring their arms close to their bodies, they spin faster. Physics dictates that this concept should hold true for a shrinking cloud of star-forming gas: As it shrinks, it should spin faster. [Planet-Forming Disk Imaged By Telescope Array (Video)]

But astronomers have found that stars in our galaxy spin much more slowly than the laws of physics predict they should. Therefore, there must be some mechanism that's dissipating angular momentum from stars soon after they are born, the researchers said.

In the new work, published online June 12 in the journal Nature Astronomy, astronomers observed a massive newborn star called Orion KL Source I in the Orion Nebula and used ALMA to reveal the rotation of its powerful stellar winds.

Located 1,400 light-years away, the Orion Nebula is the nearest star-forming region to Earth, and with ALMA's incredible observing capabilities, the researchers could precisely measure Source I's outflows.

"We have clearly imaged the rotation of the outflow," Tomoya Hirota, an assistant professor at the National Astronomical Observatory of Japan (NAOJ) and SOKENDAI (the Graduate University for Advanced Studies) and lead author on the paper, said in the statement. "In addition, the result gives us important insight into the launching mechanism of the outflow."

Hirota's team noticed that the outflow of stellar gases is rotating in the same direction as the star and that it emanates from Source I's hot gas disk, and not from the star itself. This finding agrees with a theoretical "magnetocentrifugal disk wind model," the researchers said.

In this model, gas is ejected from the rotating disk and is forced to move outward. Like a spinning lawn sprinkler, propelled by centrifugal forces, the water spirals outward, away from the sprinkler head, siphoning some of the star's angular momentum. But in the case of this star, the spinning gases leaving the disk are also directed up and down along magnetic-field lines to create the spinning outflows that ALMA has detected. And the researchers believe that these flows are dissipating rotational energy from the baby star, slowing down its rotation, and therefore possibly explaining why stars in our galaxy rotate more slowly than expected.

"In addition to high sensitivity and fidelity, high resolution submillimeter-wave observation is essential to our study, which ALMA made possible for the first time," Hirota said. "Submillimeter waves are a unique diagnostic tool for the dense innermost region of the outflow, and at that exact place, we detected the rotation.

"ALMA's resolution will become even higher in the future," Hirota added. "We would like to observe other objects, to improve our understanding of the launching mechanism of outflows and the formation scenario of massive stars with the assistance of theoretical research."