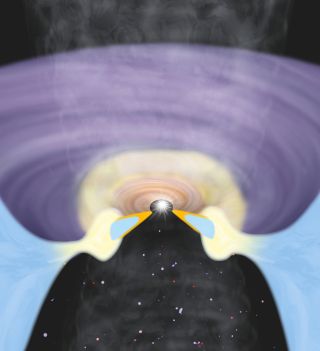 Researchers think the collapsing gas cloud forming the new star system L1527 might look something like this — with a large, flattened envelope of gas transitioning to an inner protoplanetary disk. Data from the Atacama Large Millimeter/Submillimeter Array in Chile suggests the material experiences a slow-down at the spot where its angular momentum overpowers the star's pull inward.
(Image: © RIKEN)

A cosmic "traffic jam" may be critical to the formation of planets, a new study suggests.

Stars are born from massive clouds of gas and dust that collapse under their own gravitational pull. During this process of gravitational collapse, material whirls faster and faster as it gets closer to the newborn star, in a speed-up is similar to how a figure skater spins faster with arms pulled inward than with them outstretched.

Finally, the angular momentum is too great for the star's gravity to attract the matter in any closer. But somehow, star systems are able to bypass that natural barrier and pull in enough material to form an inner disk that goes on to sprout a set of planets. [Planet-Forming Disk Imaged By Telescope Array (Video)]

The new study gives astronomers an idea of how this may happen. The research team mapped the structure of a newborn star system called L1527, which has only 0.18 times the mass of the sun but whose surrounding envelope of gas stretches to more than 1,000 astronomical units (AU). (An AU is the average sun-Earth distance: about 93 million miles, or 150 million kilometers.)

The smaller, planet-forming disk extends about 90 AU from the star. The whole system is about 450 light-years away from Earth, in the constellation Taurus, one of the closest newborn star systems.

The team, led by physicist Nami Sakai at RIKEN in Japan, previously mapped the molecular makeup of the system, which faces Earth's solar system edge-on, revealing exactly where the envelope ends and the disk begins.

But there was still a puzzle: How did material get from the envelope of gas surrounding the system to the protoplanetary disk around the star, when it should have been moving too fast for the star to pull it inward?

The answer is a massive traffic jam.

"As we looked at the observational data, we realized that the region near the centrifugal barrier — where particles can no longer infall — is quite complex, and we realized that analyzing the movements in this transition zone could be crucial for understanding how the envelope collapses," Sakai said in a statement.

She described a sort of "traffic jam" happening at the point where the angular momentum overwhelmed the gravitational force of the forming star. The buildup of all the material at that point causes a shock wave and slows the gas, kicking some of it up and out of the disk's plane. This is enough to sap some of the rotational energy, slowing things down enough that material can be pulled in to the planet-forming disk.

Sakai has been studying this particular newborn star system for almost 10 years, she told Space.com in an email. She and others have been scrutinizing the system for so long because it's the precursor to a sun-like star, she said, and because of the lucky edge-on view Earth has of the system. Seeing the forming star and disk from that perspective lets researchers understand what's going on above and below the plane of the disk, not just on its surface, she said.

"We, observational astronomers, have usually thought [of] a disk structure in 2D space," Sakai told Space.com. "But, in reality … noticing the importance of the vertical structure is the most important finding to solve the 'angular momentum problem' in disk formation."

The researchers used the massive Atacama Large Millimeter/submillimeter Array (ALMA) radio telescope in Chile to pick up radio waves emitted from specific gases making up the envelope and part of the disk. These measurements revealed that the material experienced a shock wave before reaching the slowed-down planetary disk.

Because the L1527 system is seen nearly edge-on, the shape came across as a bar that broadens at the disk's edge. The orientation also allowed the researchers to determine how fast the disk and envelope are rotating. [Galactic 'Mega City' Shows Mysterious Spots of Star Formation (Photos)]

"I think it's actually quite [a] remarkable result, especially the fact that they're seeing that it looks like the rotation of the disk is actually slower than the rotation of the gas that's coming in from the cloud," said John Tobin, an astrophysicist at University of Oklahoma who was not involved in this study. "Their figures are quite convincing of what's happening there," he told Space.com.

Tobin's team measured L1527's mass in 2012, and he's also in the process of analyzing the nearby system using ALMA, focusing on radio emissions coming from different molecules than those investigated by Sakai's team. His preliminary data shows less of the system's detail, but seems to match up with the process Sakai uncovered, he said.

"It wasn't even clear that this was happening until just a few years ago, and the evolution of our understanding of disk formation has really been led by the sensitivity of ALMA, because we couldn't see molecules at these resolutions before," Tobin said. "Now, we can really get a very clear view of what's happening as the disk is forming."

Going forward, Sakai and others will keep investigating the system using different chemical signatures to try and track the gas and dust as the planetary system comes together, she said. They will also turn their eyes to other newborn star systems to see if they're facing the same boundary pile-up, she added.

"First, I would like to confirm how ubiquitous this phenomenon is, by observing many other protostellar systems at a high angular resolution of ALMA," Sakai said. "I hope to say something about 'typical size of the disk' on the basis of the statistical study.

And revelations here can teach researchers about Earth's solar system, too: "At the same time, I am going to explore the chemical composition of the infant disks in detail in order to understand the environmental/chemical origin of the solar system," she added.

The new work was detailed Jan. 13 in the journal Monthly Notices of the Royal Astronomical Society Letters.