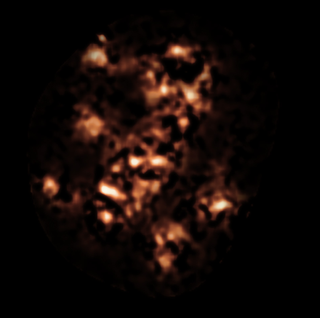 The APEX telescope in Chile captured this view (in submillimeter light) of the area around the Spiderweb Galaxy, which is a protocluster of galaxies that are around a radio galaxy with a supermassive black hole in the center. Some of the blobs are star-forming galaxies obscured by dust.
(Image: © ESO)

A new photo of a huge galactic "mega city" under construction in the early universe shows star formation happening in unexpected places, scientists have found.

The new image of the Spiderweb Galaxy (also known as MRC 1138-262) shows blobs of dust that are actually galaxies, captured by a European Southern Observatory telescope in Chile. The entire galaxy cluster surrounds a radio galaxy that has a supermassive black hole at its center. ESO also released a video flythrough of the galaxy image, and you can see it on Space.com

Here's where the surprise came: Scientists discovered that 10 billion years ago, star formation was happening mostly in one spot that wasn't at the center of the galaxy complex. Astronomers instead thought star formation would happen in the filaments of the cluster. Why is unclear.

"We aimed to find the hidden star formation in the Spiderweb cluster — and succeeded — but we unearthed a new mystery in the process; it was not where we expected," lead researcher Helmut Dannerbauer, a post-doctoral galaxy researcher at the University of Vienna, Austria, said in a statement. "The mega city is developing asymmetrically."

Galaxy clusters are the largest structures in the universe, but their formation and evolution is poorly understood.

APEX examined the galaxy cluster in submillimeter wavelengths designed to penetrate dust. Across 40 hours of observations, the researchers found four times as many sources of star formation than previously known.

"This is one of the deepest observations ever made with APEX and pushes the technology to its limits – as well as the endurance of the staff working at the high-altitude APEX site," Carlos De Breuck, a co-author on the study who is the APEX project scientist at ESO said in the same statement.

These starbirth hubs are happening at the same distance as the cluster itself, according to observations using other wavelengths of light, which shows the star-formation regions must be part of the cluster.