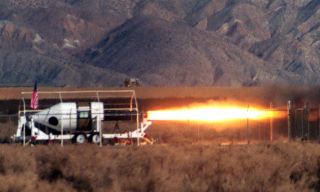 The rocketengine behind the privately built, piloted spacecraft SpaceShipOne will carrymore propellant and burn longer during a Wednesday space shot, but has notundergone any serious modifications since its historic June flight, accordingto its developer.

"We're notchanging anything," said aviation pioneer Burt Rutan, who developed thespacecraft with his Mojave, Californiafirm Scaled Composites, in a telephone interview to clarify an earlier story. "It's the same motor and the same tank."

Thespacecraft is one of about two dozen entries in the international Ansari X Prize competition to build and launch a reusable,three-person spacecraft to a suborbital altitude of 62 miles (100 kilometers).The first team to do so twice in 14 days wins $10 million.

During the Sept.29 flight, the rocket will carry about 150 more pounds of oxidizer and 10 extrapounds of rubber fuel than that used in SpaceShipOne'sfirst space shot. The launch is the first X Prize-qualifying flights for thespacecraft.

"Essentially,what we've done is added propellant to get more performance," Rutan said,adding the extra fuel and oxidizer should allow SpaceShipOne to fly a heavierweight, equivalent to two additional human passengers, to the target altitude."We have not been using this time scrambling to make modifications."

Thedevelopment of SpaceShipOne's engine has been anin-house effort by Scaled Composites, though some components were developed andsupplied by four separate vendors, including Thiokol, AAE Aerospace,Environmental Aeroscience Corp and SpaceDev.

Rutan saidSpaceShipOne engineers are not squeezing every ounce of performance out of thespacecraft's engine, but are looking forward to this week's launch, since manyproject team members are contributing small items to ride aboard the spacecraftas ballast.

"Our goalis to have an operable suborbital spacecraft at least as safe as the earlyairliners," he said, adding that SpaceShipOne'shybrid engine is a safety breakthrough. "If we're going to have space tourism,we need greater safety for any manned spacecraft."