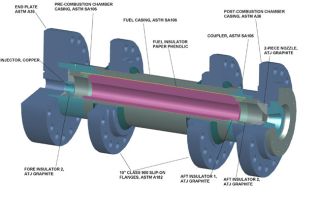 A schematic of the fuel pressure chamber for a hybrid rocket motor developed under a joint project between researchers at Stanford University and NASA's Ames Research Center.
(Image: © NASA/Ames.)

When SpaceShipOne screams skyward this month on a mission to win an international human spaceflight competition, its rocket motor will be more powerful than ever, according to the engines builders.

Since its historic June 21 flight, in which SpaceShipOne carried the first civilian pilot to the edge of space and back, spacecraft and engine engineers have been working to boost the vehicle's performance.

"Our motor performed flawlessly during that flight," said Jim Benson, founding chairman and chief executive of the firm SpaceDev, of SpaceShipOne's inaugural manned spaceflight. "But we beefed up the engine even more."

SpaceShipOne's engine has been modified to carry more propellant and burn longer than in previous flights, Benson told SPACE.com, adding that the engine has been enhanced to perform 20 percent beyond original requirements.

The Poway, California-based SpaceDev provides key components for SpaceShipOne's engine and is responsible for refueling the spacecraft after each flight. SpaceShipOne was designed by aviation pioneer Burt Rutan and his firm Scaled Composites in Mojave, California.

Rutan and civilian astronaut Mike Melvill, who piloted SpaceShipOne's first space shot, were unavailable for comment due to travel and work schedules.

SpaceShipOne is currently slated to make two manned flights, the first set for Sept. 29, with its modified engine. The double space shot will mark the first attempt to snag the Ansari X Prize, an international competition among more than two dozen teams to build and fly a reusable spacecraft capable of carrying three people 62 miles (100 kilometers) up, land them safely and repeat the feat within 14 days. The first to do so before the end of the year nabs a nifty trophy and $10 million.

SpaceShipOne uses a hybrid rocket engine that uses both liquid and solid propellant to propel it into space. The complete system consists of a liquid nitrous oxide (or laughing gas) oxidizer and a solid form of rubber fuel, which are burned together for about 76 seconds during an average flight, Benson said.

To give SpaceShipOne an added kick in its next flight, engineers have increased the amount of liquid nitrous oxide for the spacecraft's initial burn and lengthened its burn time by a few seconds.

Benson said that during each SpaceShipOne engine burn, there is a point where its fuel oxidizer tank switches from using liquid nitrous oxide to a gaseous form, which produces a dramatic drop in thrust.

But the increased liquid nitrous oxide should delay that drop off and provide more thrust earlier in the flight, when SpaceShipOne's control surfaces can still bite into the Earth's atmosphere for steering, he added.

During the June 21 flight, a steering glitch forced SpaceShipOne to miss its reentry target by about 22 miles.

"We have gone to the limits of what this system can do, which is way beyond the original design and requirements," Benson said, crediting the success to cooperation between SpaceDev and Scaled Composites team members. "That's really allowed us to squeeze every ounce of performance out of both systems, spacecraft and propulsion."