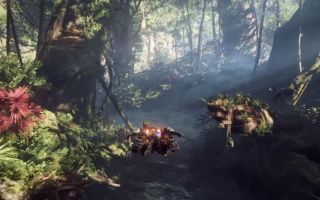 Many of us might know BioWare as the creator of moody, thoughtful games like Mass Effect. But the developer isn't afraid to blow some s**t up as we learned during the exclusive first look at gameplay for its new game Anthem. Our first taste of the game began with a meeting in a bustling bazaar. After explaining that he'd gotten himself and some other freelancers in trouble, it was time to jump in.

In the world of Anthem, you'll play as one of the many freelancers who protect Fort Tarsas from the dangers of the outside world. And if the demo is any indication, those troubles include hulking alien monsters and other humans. To help you fend against the onslaught, freelancers are outfitted with exosuits called javelins that grants the player superhuman abilities such as flight and super strength.

Thanks to the customization aspect, no two suits should play the same. The exosuits will be categorized into several classes like the well-rounded Ranger, which will be popular with jack-of-all-trades players. And the Colossus class, which will act as the damage-absorbing Tank that anyone familiar with MMORPGs will recognize. In addition, you'll also have access to a myriad of different weapons including guided missiles, assault rifles and some badass volt rifle called Jarra's Wrath.

Anthem takes place in a vast open dynamic world with unexpected danger around every corner, evidenced by the large fauna, pouncing on the players at every turn. And since this is a 4K game, Bioware took some time to dwell on the sumptuously-colored world around them. The highlight was when the characters dove underwater to show off spectacular water effects. And in an ensuing firefight, the bullets exploded in a shower of flowing red embers.

The demo ended on a high note with a team of four flying into a glowing, swirling nexus of the unknown, leaving us waiting until Fall 2018.