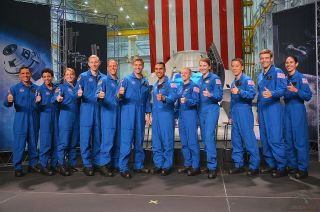 HOUSTON — To say NASA's new astronauts are happy to have been selected would be an understatement.

"I do not think I ever smiled that big in my life," said Zena Cardman, one of the 12 new astronaut candidates, or "ascans," announced on Wednesday (June 7).

"I had my hand over my heart, because it was just absolute, utter overwhelming emotion," said Cardman, a geobiologist, describing the phone call she received on May 25 inviting her to come work for NASA. "I have not stopped smiling since." [Meet NASA's 2017 Astronaut Class]

Cardman and her 11 classmates comprise NASA's 22nd group of trainees since the original Mercury 7 astronauts were selected in 1959. The 2017 class includes seven men and five women, ranging in age from 29 to 42.

The candidates will report to NASA's Johnson Space Center in Houston in August to begin two years of basic training, during which they will be taught the baseline skills to conduct spacewalks, operate robotic systems, fly supersonic jets and work with multinational crewmates on spacecraft and the International Space Station. [What It's Like to Become a NASA Astronaut: 10 Surprising Facts]

"Really looking forward to working in the neutral buoyancy lab and hopping into a spacesuit and pretending to do spacewalks," Matthew Dominick, the department head for the Navy's Strike Fighter Squadron 115 based on board the USS Ronald Reagan, told collectSPACE.com.

"I am actually really looking forward to learning the Russian language," Cardman added, referring to the requirement that astronauts learn Russian to work with their cosmonaut crewmates aboard Soyuz spacecraft and the space station. "I think the chance to learn a new language as an adult is a pretty amazing opportunity."

A number of the new ascans have worked in remote locations, an experience that may lend itself to their future missions.

"One of the things I think was a bigger focus in this selection was skills that are appropriate for longer-term spaceflight, so stays on the ISS that are six months or longer, or possible deeper space exploration missions," Loral O'Hara, a research engineer who has worked as a sea-going mechanical technician for the Woods Hole Oceanographic Institution in Massachusetts, told reporters. "A lot of us have a background in doing work that involves in similar skills, like working in Antarctica for Zena or submarines for Kayla [Barron]."

"We have a little bit more remote, extreme environment skill set than maybe past classes did," she said.

NASA intends for this class to continue crewing expeditions to the space station, launching in the coming years on a new fleet of U.S. commercial spacecraft being built by Boeing and SpaceX.

Class member Warren "Woody" Hoburg, an assistant professor of aeronautics and astronautics at MIT, previously worked for Boeing's commercial airplanes product development division, and Robb Kulin has worked as an engineer at SpaceX since 2011.

"I'll ride on whatever spacecraft I can go. I am pretty confident on the processes to get us there safely," said Kulin, remarking on his choice for launching on Boeing's Starliner or SpaceX's Dragon capsules. "Hopefully, I will one day fly on a vehicle that has components that I got to design."

"I have been able to work on several different missions, most of which were Mars related, but not all of them," said Watkins. "Most recently, I have been working as a member of the science team on the Curiosity Mars rover. That has been quite an experience."

NASA is currently working towards sending astronauts on missions beyond Earth orbit, to the moon and ultimately Mars.

"It would be awesome to be the first person to do something — whether it is on a new planet or go back to the moon," said Dominick. "But more so it is about being part of a team and working on tough problems. We don't have to be 'the' person, but we want to be part of the team that moves forward."

"I think for the future [the destination] is a little unclear," stated Jonny Kim, a Navy SEAL and physician. "But we are happy to be here to finish our candidate training and venture out deep into space and the solar system."