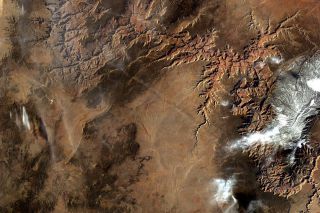 Middle school students captured this spectacular photo of the Grand Canyon from space using the internet-operated Sally Ride EarthKAM on the International Space Station on April 3, 2017. NASA showcased the image on May 30.
(Image: © Sally Ride EarthKAM)

The spectacular Grand Canyon reigns below wispy clouds in a new jaw-dropping view from the International Space Station (ISS).

This image was captured by the student-controlled Sally Ride EarthKAM camera on the ISS. The camera is named after the late NASA astronaut Sally Ride, the first American woman in space, who initiated the development of a predecessor program, called KidSat. (Ride died in 2012 of pancreatic cancer.) [Amazing Photos of U.S. National Parks from Space]

To operate EarthKAM, students use a web-based interface to remotely control a digital camera on the space station. That allows them to photograph the coastlines, mountain ranges and other interesting geographical features of Earth, NASA officials said.

EarthKAM has been in operation since the first mission to the space station, Expedition 1, in 2000. It is used for about four missions per year. The next program, Mission 58, begins this fall. Middle school teachers and students who are interested in participating in the program can apply via the EarthKAM website.