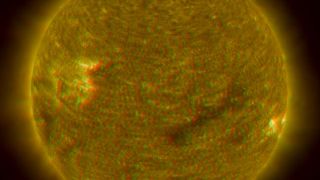 Closer view of the equatorial region of the Sun on March 24, 2007 from the STEREO mission.
(Image: © NASA)

Scientists unveiled today some of the first 3-D images of the violent electrical storms that rage within the Sun's atmosphere.

In the new images, the electrified loops and charged particles that blow from the Sun's surface seem to come to life. Besides the oohs-and-aahs, the results will help scientists track powerful solar eruptions and predict how they could affect Earth, similar to hurricane-tracking.

The pictures were snapped with two nearly identical observatories that orbit the Sun in tandem. Called STEREO (Solar Terrestrial Relations Observatory), the spacecraft were launched in October 2006, but it wasn't until the end of March that the two observatories were separated by enough distance to allow them to generate the 3-D pictures. The technique is similar to how the offset between your eyes provides you with depth perception.

In particular, the observatories have their eyes on coronal mass ejections, which are violent eruptions that carry massive amounts of electrically charged gas called plasma from the Sun's atmosphere. Once unleashed, these plasma clouds race away from the Sun at up to a million miles per hour.

Among the new images is one showing a plasma cloud lifting off the solar surface. NASA also released a video made from the data.

"Coronal mass ejections you might think of as analogous to hurricanes here on Earth," said STEREO project scientist Michael Kaiser of NASA's Goddard Space Flight Center, in Greenbelt, Md. Meteorologists are now able to predict with much accuracy which storms on Earth will turn into hurricanes and when and where they could make landfall.

"We are trying to do the same thing with these coronal mass ejections," Kaiser said.

The coronal mass ejections headed toward Earth are particularly tricky to track because the spacecraft "watching" them sit directly in front of the Sun.

"It's almost like somebody blowing a smoke ring at you from across the room and trying to predict how fast it's moving," Kaiser told SPACE.com. "What you need is somebody on either side of the room looking at that same smoke ring and they can triangulate on it."

That's what STEREO's two observatories do.

The results could make space weather easier to predict.

For instance, as a coronal mass ejection plows through the solar system, it slams into the slower solar wind (a thin stream of plasma constantly blowing from the Sun). The collision with the solar wind generates a shock that accelerates electrically charged particles in the solar wind, causing radiation storms that can disrupt sensitive electronics on satellites and cause cancer in unshielded astronauts.

"All the spacecraft up there have these micro-circuits in them, and they are very susceptible to small changes in voltage and current," Kaiser said. "When a big electrical storm from the Sun hits, you can easily get some upset spacecraft put out of commission."

"Previous imagery did not show the front of a solar disturbance as it traveled toward Earth, so we had to make estimates of when the storm would arrive," said one of STEREO's principal investigators Russell Howard of the Naval Research Laboratory. "These estimates were uncertain by a day or so. With STEREO, we can track the front from the Sun all the way to Earth, and forecast its arrival within a couple hours."

If scientists could figure out the when and where of solar electrical zaps, engineers could take preventive actions such as putting a spacecraft in a low power mode until storms pass.

Earthlings also are susceptible to the solar storms. Coronal mass ejections can dump extra current into long-distance transmission lines, causing an overload. "That can flick a circuit breaker somewhere and then another one is flicked, and pretty soon you've got a whole outage," Kaiser said.

"STEREO isn't going to solve this whole problem and let us suddenly be able to predict these things a week ahead, but it's the next step in our journey toward doing that," Kaiser said, "kind of like the weather people were in the 1950s and 60s." [From NASA: How to Get or Make 3-D Glasses]