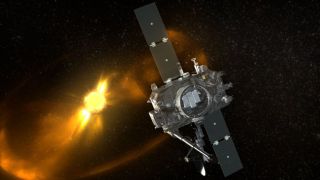 Almostidentical twin probes, dubbed SolarTErrestrial RElations Observatory (STEREO) and scheduled to be launchedaboard a Delta Rocket II on Aug. 31, will embark on a two-year mission to providethree dimensional views of the Sun.

The satelliteswill provide perspective on the origin, evolution and consequences of coronalmass ejections (CMEs).

"Nowwe're very interested in this because these storms can cause all sorts ofelectrical disturbances on Earthparticularly on spacecraft that are very sensitive to small changes in currentand voltage levels," Kaiser said in a STEREO Pre-Launch Teleconferencetoday. "They can also affect power on the ground."

A solarstorm in the late 1980's was responsible for a famous outage of the entire Quebec power grid in Canada.

Theenergetic particles associated with such outbursts from the Sun can also harmastronauts when they leave the Earth's magnetic field to go into free space andon to long duration missions, such as a journey to Mars.

The datafrom the spacecraft will also help scientists determine how the Sun affectsspace weather.

"Interms of space-weather forecasting, we're where weather forecasters were in the1950s," Kaiser said. "They didn't see hurricanes until the rainclouds were right above them. In our case, we can see stormsleaving the Sun, but we have to make guesses and use models to figure out ifand when they will impact Earth."

In order tocreate a multidimensional view of the Sun and provide depth perception, the twoprobes will be placed in different orbits of the Sun. Spacecraft "A"will be in orbit moving ahead of Earth and probe "B" will lag behindas the planet orbits the Sun. Each probe will sport imaging telescopes andequipment to measure solar wind particles and radio waves.