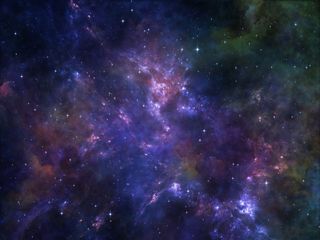 A new study may help reveal the nature of dark energy, the mysterious substance that is pushing the universe to expand outward. Dark energy may emerge from fluctuations in the nothingness of empty space, a new hypothesis suggests.

That idea, in turn, could also explain why the cosmological constant, a mathematical constant that Albert Einstein conjured up yet famously called "the biggest blunder of his life," takes the value it does. [8 Ways You Can See Einstein's Theory of Relativity in Real Life]

The new study proposed that the expansion is driven by fluctuations in the energy carried by the vacuum, or regions of space devoid of matter. The fluctuations create pressure that forces space itself to expand, making matter and energy less dense as the universe ages, said study co-author Qingdi Wang, a doctoral student at the University of British Columbia (UBC) in Canada.

Scientists call the force that pushes the universe to expand a cosmological constant (though it isn't a "force" in the strict sense). This constant is the energy density of space itself. If it is greater than zero, then Einstein's equations of relativity, which describe the structure of space-time, imply an expanding universe. In the late 1990s, measurements of distant supernovas showed that the universe was accelerating, not just expanding. Cosmologists call the energy that drives that acceleration dark energy. Whatever dark energy is, it dissipates more slowly than matter or dark matter, and doesn't clump together the way either of them do under the influence of gravity.

This acceleration has been a big quandary for physicists, because it contradicts the predictions of quantum field theories, the theoretical frameworks that describe the interactions of the tiniest subatomic particles. Quantum field theories predict vacuum energies that are so large that the universe shouldn't exist at all, said Lucas Lombriser, postdoctoral fellow at the Royal Observatory, Edinburgh, in Scotland, who was not involved in the new study. This discrepancy is called the "old" cosmological constant problem, and physicists generally thought that once new physics was discovered, the cosmological constant would disappear; expansion would be explained in some other way.

However, when scientists discovered the accelerated expansion, a new problem arose. According to theoretical calculations, the cosmological constant should be 50 to 120 orders of magnitude larger than it is, with a correspondingly large rate of expansion, Lombriser said.

Essentially, the energy density of the universe (how much energy there is per unit volume) should be gigantic, and it clearly isn't.

The new work addresses not only what dark energy is but why the rate of universal expansion has the value it does.

"Everybody wants to know what dark energy is," Wang told Live Science. "I reconsidered this question more carefully," from the perspective of the universe's energy density.

Wang and his colleagues assumed that modern quantum field theory was correct about the energy density being very large, but that the vacuum fluctuations, or the movements of empty space, were very large on tiny scales, near what is called the Planck length, or 1.62 × 10 ^ minus 35 meters. That's so small that a proton is 100 million trillion times bigger.

"Every point in space is going through expansion and contraction," he said. "But it looks smooth just like a table looks smooth from far away."

The vacuum fluctuations, in Wang's formulation, are like children on a swing pumping their legs. Even though nobody is pushing them, they manage to impart extra energy on the swing, making the swing go up higher than it would otherwise. This phenomenon is called parametric resonance, which basically means that some piece of the system — the expansion and contraction, or the swinging of the child's legs — changes with time. In this case, the density of a very tiny portion of the universe is changing, Wang said.

As a result of Wang's approach, there's no need for any new fields, as in some dark energy models. Instead the expansion of the universe is roughly the same as that already predicted by quantum field theory.

While Wang's idea is a good one, that doesn't mean it's the end of the story, Lombriser said. The question is whether observations of the universe bear the theory out, he said.

"So far, they can argue that the vacuum contribution is in the right ballpark for what is being observed (which, if it holds up, is already a huge success)," Lombriser said in an email. "They have not yet made an accurate prediction for the exact observed value, but this is something they intend to further investigate in their future work."

Other physicists are more skeptical.

"On these high-energy scales, classical general relativity doesn't work any longer, but that's what they use. So, their approximation is interesting, but it's not well-justified, because in this limit, one should be using quantum gravity (a theory which we don't have)," Sabine Hossenfelder, a research fellow at the Frankfurt Institute for Advanced Studies in Germany, told Live Science via email.

"This paper is simply a first step in the process," said study co-author William Unruh, a physicist at UBC. "But I think the path is worth pursuing, as our results are suggestive."

The study is published in the May 15 issue of the journal Physical Review D.