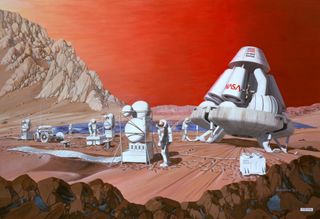 An illustration of a human Mars colony. To make human missions to Mars a reality, NASA will need to give lawmakers a compelling reason to support a crewed Red Planet mission.
(Image: © NASA)

Getting humans to Mars presents enormous challenges in science and engineering, but NASA also needs to think about political challenges, according to a panel of experts who spoke at the Humans to Mars Summit this week. If a mission to the Red Planet motived young people to pursue careers in science and related fields, which would in turn help stimulate the economy, lawmakers might get behind Mars exploration, the panelists said.

The biggest challenge to achieving NASA's plans for human exploration of Mars is continuity in relevant government policies throughout different presidential administrations, said Michael Raftery, who served as a project lead at Boeing on systems integration for the International Space Station. [NASA's Mars Base Vision in Images]

To maintain that kind of continuity, NASA needs to show Congress and the current administration "consistency and constancy of purpose" for the project, he argued during a panel discussion titled "The Path to Afford and Sustain Human Exploration of Mars." His fellow panelists agreed.

"Sustainability for a Mars exploration effort … requires a considerable degree of consensus," said Jeff Bingham, former senior advisor on space and aeronautics on the U.S. Senate's Commerce, Science and Transportation committee. "For a government-funded and -managed exploration program, probably the most important element is policy continuity."

In the 1960s, the Apollo program's sole purpose was to beat the Soviet Union in the Cold War space race, so a huge amount of government funding was allocated to the space program over a short period of time, the panelists said. But the political motivations for sending humans to explore Mars, and to ultimately create a sustained presence, are much more hazy, the panelists said.

Good reasons for going to Mars include science returns, fulfilling humanity's desire to explore, the creation of tangential jobs related to the program, the prestige the U.S. could gain from accomplishing such a momentous task and even that it's "human destiny" to become a multiplanetary species, said Pascal Lee, a planetary scientist at the SETI Institute. He's also director of the NASA Haughton-Mars Project, which maintains an "analogue" Mars research station in the Canadian Arctic. But none of these reasons will necessarily create the political impetus to spend a large part of NASA's budget — made up of taxpayer dollars — on such an effort, he said.

"The Apollo program was definitely a Cold War response to a perceived threat, and it served the national interest to go to the moon at the time," he said. "But once you're committed to going to the moon, what are you going to do [once you get there]? … You're going to collect rocks. You're going to do science. Science is what is going to dominate your activity, but it's not the [lawmakers'] motivation for going."

And therein lies a problem, the panelists said: If scientists and advocates can't convey a clear purpose for the exploration of Mars, public opinion will waver and Congress will be less inclined to support NASA funding for the project. At worst, space programs begin under one presidential administration, only for the next administration to strip funding from the project, the panelists said.

For example, in 2010, the Obama administration canceled the Constellation program after a committee found the effort to be unsustainable under NASA's budget (although the Orion spaceship from the program continues to undergo development). More recently, the Trump administration's proposed 2018 NASA budget would cancel the Asteroid Redirect Mission (ARM) that is currently in development and that would send a robotic spacecraft to an asteroid and redirect it into lunar orbit.

But since the Apollo era, some long-term NASA projects have survived under multiple administrations and, according to the panelists, lessons should be learned from these successes if NASA is going to achieve a crewed Mars mission. For example, the panelists pointed out that the 135 space shuttle missions were carried out over 30 years under six different administrations under an approximately "flat" budget (i.e., the NASA budget, apart from a few fluctuations, remained approximately the same year on year). In that time, with the help of Russia and other international partners, the International Space Station (ISS) was constructed, and it continues to be crewed years after the shuttle fleet was retired.

Could a mission to Mars operate on a flat budget while maintaining the political and public interest to maintain funding over many years?

Using the "Antarctica model," Lee argued, it might be possible to launch a science mission to Mars even if science isn't the driving motivation for sending astronauts there in the first place.

"We spend about $2 billion a year to maintain a presence in Antarctica," he said. "The justification for that, on the surface, is that [the U.S. is] doing fantastic science in a very collaborative environment. But the truth is that $2 billion a year could not be justified if it wasn't for the politics of needing to be in Antarctica because other countries are there."

So, "we have to find a compelling reason to go to Mars that would justify the expenditure of tax dollars," he added. [Red Planet or Bust: 5 Crewed Mars Mission Ideas]

One of the main benefits to come from the Apollo program was the uptick in the number of science, technology, engineering and math (STEM) graduates, Lee said. In the U.S. during the 1960s, the number of STEM graduates approximately doubled, he said. The moon missions inspired a generation of youngsters to take on STEM topics; this gave the U.S. a competitive advantage in these fields and had tangible effects on the U.S. economy, Lee said.

A mission to Mars would have a similar effect, and if NASA's Mars exploration plans span many years, the effort could drive more than one generation of people to step into the STEM fields and supercharge the economy, Lee said.

And in peacetime, this may be one of the most potent reasons for policy makers to support human missions to Mars, he said.

Whereas the Army and Air Force protect the freedoms of the nation during wartime, Lee said, a "STEM Force" could be mobilized to safeguard the U.S. economy during peacetime.

This reality isn't lost on other nations of the world, Lee said. China, for example, is pursuing an ambitious space program that includes sending probes to the moon and returning samples. While it may seem silly to aspire to a goal that Apollo accomplished nearly half a century ago, China is benefiting from the huge surge in STEM graduates inspired by the country's space program.

"There's an entire generation of young people and kids in China who are enthralled with their space program [and] by going to the moon," Lee said. Those young people are "going to become the competition, if not the de facto leaders, in STEM fields in this century and later."

What's more, China is taking incremental steps to develop the technologies to eventually land astronauts on the moon, thus avoiding the unsustainable budget spike that the Apollo program demanded because of its incredibly short timeline (less than a decade), Lee said.

A Mars mission could help the U.S. avoid being left behind in space exploration and enjoy the economic benefits of generations of youngsters becoming inspired by space, Lee said. But the only way to get there on a flat NASA budget is with a continuity of government policy and a "consistency and constancy of purpose," he said.