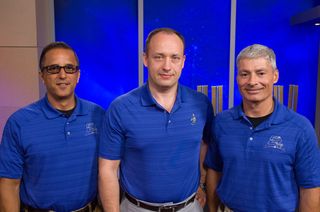 Some got off easy, while others have been waiting a long time — the three space travelers gearing up for a September launch to the International Space Station went through very different training experiences before coming together as a team.

In fact, only first-time NASA flier Mark Vande Hei had the traditional training period for this mission. He's a retired U.S. Army colonel and worked in Mission Control at Johnson Space Center before (and after) undergoing training in the astronaut class of 2009. He had the ordinary 18-24-month training process for the Sept. 13 launch.

Fellow NASA astronaut Joe Acaba, who's flown one short-duration and one long-duration flight before this, will have only six months of training; he's already been through three of them. [Life in Space: An Astronaut's Video Guide to Orbital Living]

Acaba's ride to the space station comes from a contract NASA signed in March with Boeing, which had acquired seats on Russia's Soyuz spacecraft through a deal with the Russian space agency, Roscosmos.

"I got pretty lucky with a six-month training program," Abaca said during a news briefing yesterday (May 10). He added that NASA and its international partners got together to choose the most important things to include in his training in the limited time available.

Russian cosmonaut Alexander Misurkin, on the other hand, was originally scheduled to fly in March, but was moved later after Russia decided to switch from three to two cosmonauts on the station. Misurkin, who is on his second long-duration spaceflight, is slated to command the Soyuz capsule bringing the trio up in September.

"I knew that for Mark and for Joe, now, it's been a pretty tough schedule, and they are very, very busy," Misurkin said during the briefing. "But for me, it's like … you have a distance, you know where is your final line, you start to run, run, run, and [then they say] you know what? We've decided to add some more." Misurkin said he's looking forward to finally getting to fly, and to working with Acaba and Vande Hei.

For now, the three are training together for the Sept. 13 launch, when they will join Expedition 53 on the station. They will remain in space until Feb. 23, during Expedition 54.

"During that time, the primary objective for us is doing lots of science, both to help further NASA's exploration goals and to serve the needs of the country now, to help people on the ground as a national laboratory," Vande Hei said. "We're going to have several visiting vehicles … there's a possibility of an EVA [spacewalk], but really, because we're going to be up there so long, we're just ready for whatever the planners give us."

Indeed, flexibility is crucial for long-duration flights — as well as for training processes that range from a couple years to a couple months, as the space fliers said.