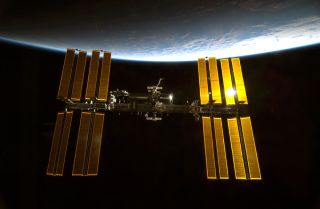 The International Space Station (ISS), photographed by an astronaut aboard the space shuttle Endeavour on Feb. 10, 2010. Astronauts who flew on ISS and space shuttle missions experienced changes in brain volume, a new study has found.
(Image: © NASA)

With Thursday's (Nov. 17) launch of three new crewmembers, the International Space Station (ISS) will be returned to full staffing — but not for long. Beginning with the next Soyuz launch, in March 2017, Russia is cutting one cosmonaut post from the station crew and doesn't plan to restore the job until a new module is launched, in 2018.

Cosmonauts typically comprise half the station's six-member crew, but "right now, we don't need it," Sergei Krikalev, a former cosmonaut who now oversees human spaceflight for the Russian space agency, Roscosmos, said in an interview at the International Astronautical Congress, which was held in late September in Guadalajara, Mexico.

Russia intends to return to full staffing after its long-delayed Multipurpose Module (MLM) is launched. That flight, currently targeted for late next year, is likely to slip to 2018, Krikalev said.

"We will need more people when we have more science," he said.

That seat can't be sold for a space tourist flight, because there would be no return trip for several months.

NASA, which plans to add a fourth crewmember once flights from the United States resume, said in an email that the agency is not talking about buying extra seats from Roscosmos at this time.

"We are internally evaluating the advantages of an extra U.S. crewmember on orbit and determining the research and extra consumables needed to support the addition. We are also examining available funding," NASA spokeswoman Stephanie Schierholz told Space.com.

"We have concluded that a March 2017 option for a crewmember is not practical. There is not sufficient time to train nor sufficient research on board at that time to make effective use of the extra crew time," she added.

The decision will leave NASA astronaut Jack Fischer and Russia's Fyodor Yurchikhin flying without a third crewmember in March 2017 for the Expedition 51/52 mission and NASA astronaut Mark Vande Hei flying only with Roscosmos cosmonaut Alexander Misurkin for Expedition 53/54 in September, NASA said in a press release on Tuesday.

Two other launches in 2017, scheduled for May and October, will include a third crewmember from the European Space Agency and the Japan Aerospace Exploration Agency, respectively, NASA said.

NASA said it plans to add another member to the station crew once commercial space taxis, currently under development by SpaceX and Boeing, begin flying. The agency said it is hoping those flights begin in 2018. Since the retirement of the U.S. space shuttles in 2011, NASA has been dependent on Russia for station crew transportation, at a cost of more than $70 million per person.

In addition to its new science laboratory, Russia plans to add a docking module and a solar-power module to the ISS. All three components could be separated from the station once it is decommissioned, and those pieces will form the core of a new Russian orbital outpost, said Vladimir Solntsev, general director of the Russian space firm RSC Energia.

Russia plans to end its participation in the ISS in 2024, Krikalev said.