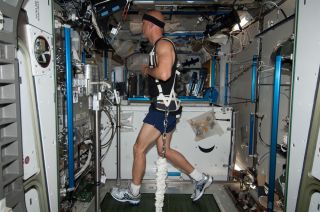 Astronauts aboard the International Space Station (such as Luca Parmitano, shown here in 2013) usually exercise about two hours per day to maintain physical health. Despite such efforts, long-duration spaceflight can cause fitness levels to drop by up to 50 percent, a recent study suggests.
(Image: © NASA)

This big reduction likely occurs because both the heart and tiny blood vessels called capillaries fail to deliver oxygen to working muscles as effectively in microgravity as they do on Earth, researchers said.

"It is a dramatic decrease," study lead author Carl Ade, an assistant professor of exercise physiology at Kansas State University, said in a statement. [The Human Body in Space: 6 Weird Facts]

"When your cardiovascular function decreases, your aerobic exercise capacity goes down," Ade added. "You can't perform physically challenging activities anymore. While earlier studies suggest that this happens because of changes in heart function, our data suggests that there are some things happening at the level of the heart, but also at the level of the microcirculation within capillaries."

Ade and his colleagues studied the exercise performance of nine NASA astronauts who stayed aboard the International Space Station (ISS), each for roughly six-month stints. The researchers compared the spaceflyers' oxygen uptake, heart output and other measurements taken during stationary-bicycle tests both before the astronauts launched and right after they landed.

Results showed that maximum oxygen uptake, a key indicator of cardiovascular health, was 30 to 50 percent lower after the astronauts came back from the ISS than before they left.

"This decrease is related to not only health, but [also] performance," Ade said. "If we can understand why maximal oxygen uptake is going down, that allows us to come up with targeted interventions, whether that be exercise or pharmacological interventions. This important new information can help these astronauts and prevent any adverse performance changes in their job."

Such interventions could be key for crewed missions to deep-space destinations such as Mars, study team members said. After all, Red Planet pioneers may be pressed into high-exertion exercise on occasion — when getting an injured or sick crewmember back to base, for example.

The team's research could also have applications here on Earth, potentially helping people with weak or failing hearts, Ade added.

The study, which was published in February in the Journal of Applied Physiology, adds to researchers' understanding that spaceflight takes a toll on the human body. Scientists and doctors already know, for example, that exposure to microgravity conditions can cause bone loss, muscle wasting and long-lasting vision problems.

Astronauts aboard the ISS engage in vigorous exercise to mitigate the first two effects, and researchers are working to better understand the vision issue so they can come up with effective interventions.