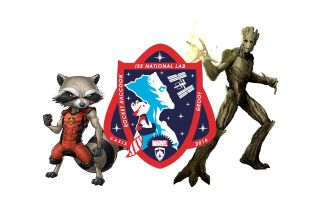 As the Marvel Comics' characters Rocket Raccoon and Groot lift off on a new space adventure in the movie "Guardians of the Galaxy Vol. 2," opening today (May 5) in theaters, their real-life role as symbols of space station science is launching in new directions.

The talking raccoon and a sentient tree-like creature (voiced by Bradley Cooper and Vin Diesel) return in the sequel to director James Gunn's 2014 blockbuster, "Guardians of the Galaxy," along with Chris Pratt (Star-Lord), Zoe Saldana (Gamora) and Dave Bautista (Drax). In the interim between the two films, Rocket and Groot moonlighted as mascots on a mission patch representing science experiments being performed as part of the U.S. National Laboratory aboard the International Space Station.

"We're really excited to take this on because we really like the whole idea of doing something for the space station," Darren Sanchez, a project manager and editor for the marketing team Marvel Custom Solutions, said when the emblem was introduced in July 2016. "The patch is a really cool idea and to utilize a Marvel character for the space station for CASIS, that's a very cool project." [Marvel's 'Rocket and Groot' Space Station Mission Patch Debuts (Video)]

CASIS, the Center for the Advancement of Science in Space, manages the U.S. National Lab under a contract with NASA.

"A major mission for us here at CASIS is to find unique and innovative ways to bring notoriety to the International Space Station National Laboratory and the research that is being conducted," said Ken Shields, CASIS' operations and educational opportunities director. "There are very few brands in the world who have as large an impact as Marvel."

The red, white and blue patch, drawn by Marvel Comics' artist Juan Doe, depicted Rocket sitting on Groot's shoulder as they look up to the space station. The insignia was used by CASIS to represent more than 100 science investigations that were launched and conducted as part of the National Lab in 2016. The studies included research related to life sciences, physical and material sciences and Earth observation.

Among the CASIS-sponsored experiments that flew under the Marvel characters' mission patch were a magnetic levitation device to study bone loss, a study to see how stem-cell-derived heart cells matured in microgravity and the demonstration of a 3D solar cell. Also flown to the station was a "controlled dynamic acceleration environment" used to dampen fluctuations imparted by spacecraft and a furnace aimed at improving the quality of semiconductor materials synthesized in space.

"The space station is all about pushing boundaries, literally expanding our horizons beyond just this planet, so I think it is a really unique endeavor," Mark Basso, a project manager and editor at Marvel Custom Solutions, said in a statement from CASIS in 2016. "It's really just an honor to be a part of that whole mission."

Embroidered patches bearing the Rocket and Groot design were launched to the space station in February on SpaceX's 10th Dragon cargo spacecraft to fly to the orbiting outpost under a commercial resupply services contract with NASA. The patches remained on the uncrewed capsule for the length of its 28-day CRS-10 mission and returned with it to an ocean splashdown on March 19.

Though the science designated by the patch is now over, Rocket and Groot's mission with CASIS is continuing. The Marvel characters will play a part in an educational outreach project to be announced later this year, according to Patrick O'Neill, the marketing and communications manager for the nonprofit organization.

"It is exciting for us because this is hopefully the beginning of something that goes beyond just the mission patch," O'Neill said.