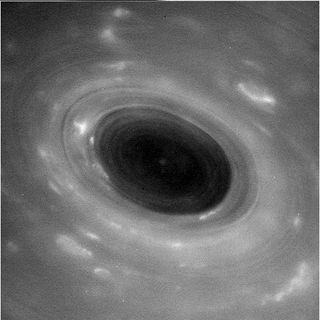 NASA's Cassini spacecraft grabbed this raw image of a "giant hurricane" in Saturn's atmosphere during its first dive between Saturn and its rings on April 26.
(Image: © NASA/JPL-Caltech/Space Science Institute)

NASA's Cassini spacecraft dove between Saturn and its rings yesterday (April 26), snapping the closest-ever views of Saturn's atmosphere. The raw images, which began to stream back early this morning, indicating the probe had survived its journey, show intricate structures and a dark, swirling storm-like feature (which NASA called a "giant hurricane").

The spacecraft came within about 1,900 miles (3,000 kilometers) of Saturn's cloud tops and within 200 miles (300 km) of the rings' innermost visible edge during the plunge, NASA officials said in a statement. Because Cassini scientists and engineers didn't know what to expect of the gap — although it looked clear, unknown dust and debris could have proved harmful — the spacecraft was turned so its 13-foot-wide (4 meter) antenna acted as a shield as it dove, collecting data all the while. Only 20 hours after the pass was it scheduled to turn back toward Earth. "Our closest look ever at #Saturn’s atmosphere and giant hurricane," NASA officials wrote in a Twitter post. During a Facebook Live event, researchers later confirmed that the dark storm was the center of the vortex at its pole, stretching 2,000 km across, or almost 1,500 miles.

The spacecraft flew through the ring plane at 77,000 mph (124,000 kph) relative to the planet, and at that speed tiny particles could have posed a large threat to its sensitive instruments without the shielding. The rest of Cassini's unprocessed photos from the crossing are available online, along with more than 380,000 images documenting the spacecraft's journey, starting months before it arrived at Saturn in 2004. [Photos: Most Powerful Storms of the Solar System]

"No spacecraft has ever been this close to Saturn before," Earl Maize, Cassini project manager and a researcher at NASA's Jet Propulsion Laboratory in California, said in the statement. "We could only rely on predictions, based on our experience with Saturn's other rings, of what we thought this gap between the rings and Saturn would be like."

"I am delighted to report that Cassini shot through the gap just as we planned and has come out the other side in excellent shape," he added.

Saturn's atmosphere is relatively cool and mostly made of hydrogen, and the pressure at Saturn's cloud tops is about the same as Earth's pressure at sea level, NASA said. It hosts layers of clouds and that huge, spinning hexagon-shaped storm on its north pole, as well as more temporary storms that streak across the planet's surface. (One was nearly as wide as Earth.) It also hosts winds among the fastest in the solar system — NASA's Voyager missions, which passed Saturn in 1980 and 1981, measured winds at more than 1,100 mph (1,800 kph).

Many mysteries of Saturn remain to be determined: the exact length of its day and internal structure, as well as the exact composition and age of its rings, could become clear over the course of Cassini's explorations.

Cassini will complete 21 more dives before its Grand Finale plunge and burn-up in Saturn's atmosphere Sept. 15 — its next dive is May 2. Because each of the dives takes a slightly different path, engineers will be ready to shield the spacecraft again if needed. But ideally, it will be smooth sailing for the spacecraft until its ultimate atmosphere dive, collecting photos of the unexplored regions all the while.