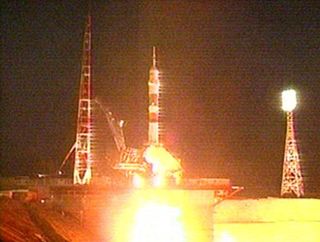 American billionaire Charles Simonyi and two Russian cosmonauts launched into space aboard their Soyuz TMA-10 spacecraft during a flawless liftoff from the Central Asian spaceport of Baikonur Cosmodrome in Kazakhstan at 1:31 pm EDT.

For his call sign, Kotov chose "Pulsar," after a type of star with a stable period of rotation. Kotov said he hoped the launch would be as stable as a pulsar.

About nine minutes after liftoff, the spacecraft safely reached orbit and inside the cabin, a small stuffed black cat doll-named "Dimlar," after Kotov's two children Dima and Lara-floated in its new microgravity environment.

The successful launch marked the second spaceflight for Yurchikhin, who first flew aboard NASA's space shuttle Atlantis during 2002's STS-112 mission to the ISS. But it kicked off the first foray into orbit for both Kotov and Simonyi, who is expected to set a new record for the longest spaceflight by a private spaceflyer.

Simonyi is reportedly paying between $20 million and $25 million for a 13-day trip to the ISS under a deal between the Federal Space Agency and the Virginia-based firm Space Adventures, which has brokered orbital spaceflights for the last four private visitors to the high-flying laboratory. He is describing his training and orbital trek via a blog and Web site at www.charlesinspace.com.

"The living compartment is fully packed, but it is not as bad as I feared," Simonyi wrote of the Soyuz TMA-10's three-module interior on his blog. "I think there will be room to move around during the two days that we spend there."

Simonyi and the Expedition 15 crew are now chasing the ISS and due to rendezvous at the orbital laboratory on April 9.

Meanwhile, aboard the space station, Expedition 14 commander Michael Lopez-Alegria and flight engineers Mikhail Tyurin and Sunita Williams are awaiting what will be their first human visitors of the year. Williams, who arrived aboard the ISS during a December space shuttle mission, will stay aboard the station to join the Expedition 15 crew.

Lopez-Alegria and Tyurin have lived and worked aboard the ISS since September 2006 and are nearing the end of their six-month mission. They will hand control of the ISS over to Yurchikhin and Kotov after 11 days of joint operations-a longer-than-usual crew change period dictated by the need for a daylight landing-and will return to Earth with Simonyi on April 20.

During the crew swap, Simonyi will perform a series of experiments for the Hungary Space Organization, Japan Aerospace Exploration Agency and European Space Agency. He also plans to communicate his spaceflight experience to schoolchildren in a series of radio broadcasts to discuss his lifelong interest in spaceflight.

But first, the American computer software pioneer had to launch spaceward, and invited his close friend Martha Stewart and 50 other friends to see him off into space.

"I've seen two launches already in Baikonur and it's an unforgettable sight," Simonyi told SPACE.com before launch, adding that he was looking forward to experiencing it for himself. "You get a different perspective, in some ways, and it's good to have done both."