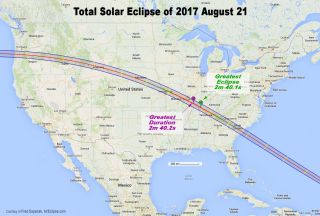 A new tactile guide lets everyone learn more about the upcoming 2017 total solar eclipse — even people who won't be able see it.

The Braille book, called "Getting a Feel for Eclipses," features graphics that teach users about the interaction and alignment of the sun with the moon and Earth. Along with the guide, associated activities clarify the nature of solar eclipses.

"These tactile books bring the theory and context to life for me. As a student who is blind, I never quite understood the beauty and vastness of space," said Mariah Williams, a senior at the College of Charleston in South Carolina, who has been blind since birth. "Now I understand what will be happening during the total solar eclipse on August 21st!" [Total Solar Eclipse 2017: When, Where and How to See It (Safely)]

A solar eclipse occurs when the sunlight reaching Earth is blocked by the moon. The type of eclipse being explored with this tactile guide is known as a total solar eclipse, which occurs somewhere on Earth about once every 18 months. The last time a total eclipse was visible from coast to coast in the United States was June 1918.

But that will change on Aug. 21, when a total solar eclipse begins in the northern Pacific and crosses America from west to east through parts of the following states: Oregon, Idaho, Montana, Wyoming, Nebraska, Kansas, Iowa, Missouri, Illinois, Kentucky, Tennessee, North Carolina, Georgia and South Carolina.

"Getting a Feel for Eclipses" will help sighted as well as visually impaired people better understand the historic event, said geology professor

Cassandra Runyon of the College of Charleston, one of the project's leaders.

"Having the chance to use an additional sense, such as touch, adds a whole new dimension to the learning process," Runyon told Space.com.

Thus far, 2,500 copies of the eclipse book have been sent to schools and libraries for the blind and state libraries, as well as NASA centers and other institutions, she added.

Some 3,000 copies are also in print for distribution at the National Federation of the Blind Conference this summer, Runyon said, as well as through museums, science centers and NASA headquarters' programs.

"And, as folks learn more about it, we are answering requests to share the book with more rural schools and/or communities who work with the blind and visually impaired," Runyon said.

Runyon said that, in addition to the eclipse book, work is underway on tactile books regarding small bodies in the solar system, ocean worlds beyond Earth and the science of spectroscopy.

"The 'Getting a Feel for Eclipses' book for the blind is just the latest in our portfolio after our 'Getting a Feel for Lunar Craters,' and a Mars exploration book for the blind we produced a few years ago," said Joseph Minafra, the lead for Innovation and Technical Partnerships within the Solar System Exploration Research Virtual Institute (SSERVI) at NASA's Ames Research Center in Moffett Field, California.

Minafra said that project team members are also working with park rangers to take advantage of opportunities to engage the public using these books for the blind.